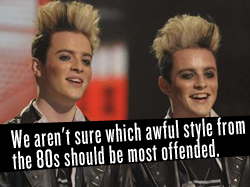 When train wrecks arrive in pairs.

You haven’t heard of them in the US, but we assure you it wont be long before this bizarre couple of lads will be firmly rooted in your nightmares as the kids will be screaming for Jedward ice cream, Jedward lolly pops,  and Jedward Corn flakes. These lads are a special brand of nightmare currently making the rounds on Simon Colwell’s X factor.

The twin brothers, John and Edward Grimes, have made the show a special haunting ground where countless fans and Englishmen have been confused that such lads could exist in their own backyards. Naturally, one would expect to find their brand of photogenic freaks— LA.

Writes the Telecom after Simon gave the boys a second chance to come and another chance for the network to milk the proverbial fat advertising cow.

The television broadcaster is selling 30 second time slots during the show’s ad break for an estimated £190,000 this month, and insiders believe that could rise to £250,000 by the last show in December – especially if the twins are still in the running.

“There’s no doubt that this is the television event of the year for viewers and advertisers,” Jim Marshall, a senior consultant with Starcom, which buys television advertising for well-known companies, told The Times. “It has become the British version of the American Superbowl”.

Delicious. Will Lilo be flown as special freak factor to round off the show? And it continues:

John and Edward, dubbed as ‘Jedward’, have turned out to be the unlikely stars of the show, with viewers tuning in to see if they can survive another week of the public vote despite being classed as the least talented on the contestants.

Ten dollars says these two geezers end up with their own reality show soon. Who needs talent when you look like a carbon copy of a constipated rooster.