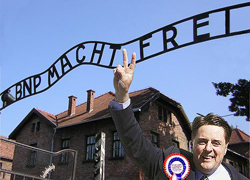 What we have now is a very frightening situation, where the real villains of British politics, the British National Party, have recently won two seats in the European Parliament.

This has been dismissed by many as a ‘protest vote’, a product of the apathy, or at the very least ambivalence, inspired by the policies of our leading parties, but to suggest that people are voting for a reported holocaust denier because they are disillusioned with the current political climate seems a little blinkered. When people want to make a vote of protest they vote Liberal Democrat, or for the Monster Raving Loony Party (yes, really). They do not vote for the BNP.

It’s seems bizarre that at a time when America is taking great leaps forward, there is a growing support in the UK for this extreme right wing group, and to dismiss this as a protest vote is naive at best. What it represents is that, as much as we may like to ignore it, there is a growing core of loyal supporters for the extreme right wing of British politics; a frightening backlash to our politically correct society.

Nick Griffin, the BNP leader who appeared last night on the BBC’s Question Time, likened the audience’s attack on him and the mob that formed outside to a lynch mob, but it was reassuring to see the united force of the protesters gathered outside the studios, and the articulate, intelligent questions put forward by the audience that left Griffin with egg on his face.

As one audience member put to a grinning Griffin, who had described white English, Irish, Scottish and Welsh people as “Britain’s aborigines”:

“Where do you want me to go? This is my county. I love this country. I’m part of this country. I was born here. I was educated here. You’d be surprised how many people would have a whip-round to buy you a ticket, and your supporters, to go to the South Pole. That’s a colourless landscape – it’ll suit you fine.”

I couldn’t have put it better myself.