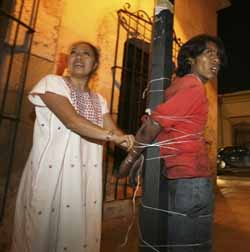 In search of sunshine, tacos, and the judicial system.

Mexico is a great place if you are after a little bit of sunshine or tacos, but not so great if you happen to be looking for justice. Well that may have changed recently as a new report identifies the very disturbing rise of constituents taking justice into their own hands. Of course, if you are thinking of make shift court rooms down the street, think more along the lines of makeshift bandits being tied to street poles and pounced with a stream of bullets. Justice you say- yes sirree – right here on your doorstep, mind the slumping bodies as you exit the car door…

As kidnappings, muggings and car jackings spiral out of control, and the authorities appear increasingly impotent, shadowy groups have been advocating justice by the sword.

In other recent cases, alleged kidnappers and car thieves have been abducted and murdered and had their corpses dumped in public places along with threatening notes.

Yowza- how about that for justice? But let’s ask what precipitated all of this fun activity, certainly not all the sunshine and tacos?

“The government is failing to provide security and people are turning to some brutal alternatives,” said Rossana Reguillo, who studies crime and violence at the Jesuit University of Guadalajara. “This is not something that has always been around in Mexico. It is a new phenomenon that has been growing since 2000.”

So this has nothing to do with Charles Bronson after all?

So if I happen to be on the wrong side of the law what can I expect to happen?

The teenagers were also forced to perform sexual acts — including kissing each other in front of the camera — as a humiliation. The gunmen are heard threatening to cut their hands off unless they comply.

After being held all night the students were dumped naked on the street and then attended at hospital for injuries including broken ribs.

The broken teeth and rib part I can always handle (sort of) but the kissing of another dude? C’mon you know I don’t do stuff like that, even if you paid me…

But where are the police in all of this?

However, one of the boys said they had first been arrested by state police and it was the officers themselves who turned them to the vigilantes. The Nayarit police chief denies the charge, saying officers did not question the boys until after they had been tortured.

Okay- so they’re on this too? I would have never guessed… But how are we to feel about such things?

“Opening the door to justice by your own hand is an enormous step back to a state of barbarism and lack of culture,” said Huicot Rivas, the president of Nayarit’s Human Rights Commission. “In a democratic state, crime can never be used to combat crime.”

However, others cheered on the vigilantes for trying to clean up the streets.

But is this the right thing to do? Taking justice into your own hands?

“I recognize that this is not the correct way to administer justice but I can’t deny that it makes me happy that this type of thing happens,” wrote another reader.

Such feelings reflect desperation among many in Mexico about the lack of security. Amid a drug war that has left thousands dead, rates of anti-social crimes such as kidnapping and carjacking have risen to become among the worst in the world. At the same time, conviction rates for these relatively minor crimes are as low as 5 percent.

Funny how the incarceration rate is so low in Mexico but so high in the US. So maybe we have a handle on justice after all, or maybe we don’t…

Mexico- shouldn’t you be making a trek over soon?