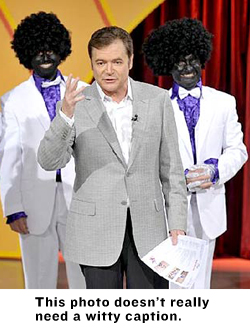 Out of Australia comes an act that left one American very disenchanted, never mind the reality…

Out of Australia comes a public relations snafu that has the Americans wincing and writhing in pain while at the same time leaving most Australians stoked in ‘good old laugher.’ Let the racist overtones go on…

The ‘’Jackson Jive,’ a self parodying act took to stage in which a fun kitch show man called Daryl Somers plays host whilst 3 judges sit and evaluate the hot mess that comes before them. The show ( Hey Hey it’s Saturday) which has always been known and understood amongst locals for its kitch and low brow humor (unlike America where all humor and kitch has to go through a corporate sounding board and then another pre screening of the pre screening) ultimately offended the guest judge Harry Connick JR who declared that such an act (of white men applying grease to their faces to portray black men) would never be allowed to air in the United States.

In fact, Harry was so offended that he gave the act a zero, while a poll taken the next day by the local TV station  who put on the show (owned by the media empire family of the Packer family) found 69 % of respondents not being at all offended by the act.

On the Bill O’Reilly show, the commentators were visibly shaken up and wondering whether Australia was still late on its civil right movement and kept harping about that laws weren’t changed until as late as 1973 (as if to suggest that Australians are still lagging in coming to terms with equality rights).

A little background check should reveal that Australia is famous for killing off 90 % of the indigenous tribes that it encountered when its ancestors first encountered the land. Coincidentally Americans are also famous for such acts except these things are generally never discussed in public because to offend the remaining Indians would be in poor taste (never mind the poor taste in killing and stealing from them in the first place).

In the end, Harry was very unhappy and was even offered a harried live air apology by the host Daryl Somers. Yet one thing remains interesting- even though Harry was correct to point out that such an act would never pass muster in America (unlike Australia where Australians either have a more relaxed attitude about such things or are simply more apt to discriminate and therefore don’t mind seeing such acts on stage which on the whole degenerates the subject) he left out something very important.

What he left out is that although this skit is a big no no in America TV land, the reality is that (never mind that civil rights laws were only passed 5 years earlier in 1968 in America) there is more violence, prejudice and discrimination being perpetrated on an every day basis in America than anywhere else in the world. It would have been nice if Harry gave this type of behavior a big fat zero as well.

Sometimes you have to look in your own back yard before you call the kettle black.