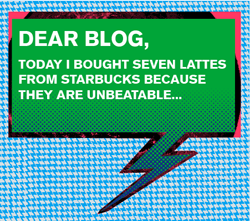 According to the Wall St Journal, life for bloggers just got a bit more miserable-

A new guideline released by the Federal Trade Commission will soon force bloggers to adopt a higher standard of disclosure as they will have to tell readers when they got money or in-kind services from a company they write about.

This will of course now mean that bloggers can’t pretend that they just happened upon a new product, venue or persona and might actually relieve the disgust most readers feel when they are reading blogs and know innately that they are being hoodwinked and had by some rabid marketing campaign designed to fill the pockets of the promoter and dare we say the blogger who has confused themselves for a journalist when all they effectively are 2 bit dog and pony salesmen.

2/ When a blogger is hung over when he blogs.

3/ In light of the latest David Letterman scandal, we’d like bloggers to disclose when they are also having affairs wit their employees, in particularly their interns. It’s the kind of dirt that we all could use…

4/ When a blogger is having an affair or relationship with one of the main sponsors of its site.

5/ When a blogger copies verbatim from other blogs and tries to pass off it off as its own.

6/ When a blogger is on the rags. If only to warn the reader that today that they are in a bad mood and to expect a healthy dissing on the world.

7/ When a blogger has just been committed. We think this type of disclosure will keep both sponsors and readers in the loop as to the general psychological make up of said blogger (but truth be told this would probably perverse raise clicks…)

9/ When a blogger is about to go out to some social event so other bloggers can then go out and blog about them and vice versa.

10/ When a blogger agrees to become a human being with integrity again. This should read as the head banner.