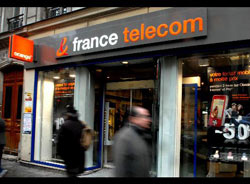 When the death rate creeps up you have to wonder…

Since going private back in 1998 France Telecom has been experiencing an anomaly of sorts. With working conditions tougher and more stringent controls in place and other savory conditions management like to put in place to fleece workers and extract profits the degree of stress it has been said working for France Telecom has shot up.

Since the beginning of 2008, 23 employees have taken their lives, but according to management that is not statistically a big aberration when you have 100 000 workers.

According to a report from BBC news–

The latest suicide occurred on Friday, when a 32-year-old woman leapt to her death at a France Telecom office in Paris.

On Wednesday, a 49-year-old man in Troyes, east of Paris, plunged a knife into his own stomach during a meeting in which he had been told he was being transferred.

The BBC goes on to report that the man is now in intensive care. That said could it be the French forever acclimated to a type of social netting rarely afforded in the United States unless you happen to be a distressed hedge fund or corporation (see- welfare does exist after all!) the French are beginning to feel the pangs of due or die that we here in the United States have a lifetime to get acclimated to.

Goes on the BBC-

The unions say a never-ending drive for efficiency is causing emotional havoc in the workforce – especially among older employees recruited when France Telecom was part of the public sector.

Since privatisation in 1998 some 40,000 jobs have gone, and unions say there is pressure on many employees either to leave or to accept new working conditions.

The moral of the lesson. Don’t work for France Telecom and if you really want to see mental and emotional breakdown come over to the United States , where economic and mental breakdowns are the current rage.