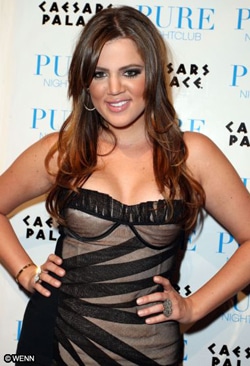 When the paparazzi can’t throw enough money at an American enigma.

What is the fascination with the Kardashian family and why are media companies willing to throw stupid amounts of money at the family who just keep laughing all the way to the bank and forth?

In today’s NY Post (Gutter) we read with intrigue about another episode of how supposedly intelligent savvy media companies squabbled amongst themselves in order to keep certain pictures off the market (the way an art dealer keeps certain Picasso paintings hidden in his closet to raise the price of outstanding Picasso paintings on the street).

With Ok Magazine forced to pay $50 000 to keep certain paparazzi pictures of the market (on top of the $250 000 it has already paid to be humiliated) it looks like the Kardashian clan who we frankly have no idea who they are, why they matter and what positive contribution they have had to society are commanding such ardent respect and feeding frenzy.

A close look at Paparazzi pictures of the family had us barfing and chuckling and another revelation that E news (yes the line is deep and strong) had essentially financed Khloe’s circus wedding to Lamar ODON (another unknown in our eyes…) had us wondering has America (or just Hollywood) completely lost its collective mind?

With helicopters drowning out the couple’s wedding vows (at least this makes sense right at least on a literal and a metaphorical level) the younger sister Kim (Ok magazine’s terror and beauty editor) added to the drama by avidly twittering about events close to hand.

This all makes us wonder at what point do people live for reality and at what point do they live for television cameras? Could it be the Kardashians are innocent of their folly (lots of money and publicity aside) and have somehow convinced themselves that we the world have a vested interest in their personal madness?

The answer believe it or not rests on you dear reader and viewer, you have despite what you have been told the power to shut the TV off and to never subscribe to Ok magazine ever again.

The moral of the lesson- you too can become an eyesore and a public sensation if you can convince people to pay attention to you.