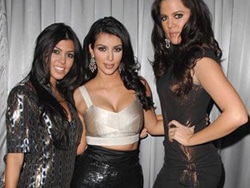 In the day and age where everybody is in eager pursuit of their 15 minutes of fame, the Kardashians seem to be trying to push away the limitation on their stage time. Not only did the middle sister Kim, infamously make a sex tape, the whole family cashed in on her notoriety by starting a reality show that showcased the entire family in all its’ catfights and pole-dancing little sisters. From there, the two less famous sisters, Kourtney and Khloe, began their reality show: Kourtney and Khloe Take Miami.

Now, the eldest sister Kourtney is pregnant with her no-good boyfriend Scott’s baby. Oh, the drama of trying to hide it from the reality show’s cameras and the media, the wanting of privacy and secrecy that all flew straight out the window the minute the cat got out of the bag. Now they seem to be milking it for all its worth. Not wanting to be beat, now the youngest sister Khloe is suddenly marrying LA Lakers player Lamar Odom, with the bachelor and bachelorette parties being covered by E!.

Star Magazine reported the all-out jealousy war between the sisters to be the one in the center of attention. Albeit, Star isn’t the most reliable source of information, however, with the antics of these sisters through the progression of getting famous through a sex tape, having 2 reality shows under their belt, getting pregnant, and having a quickie engagement? I smell a jealous rat hungry for fame.

Spinning away from this particular family, it seems as though in the past few years, that having a baby was the new “it” thing to do. From Nicole Richie, to Ashlee Simpson, to Jamie Lynn Spears. Carrying a baby, accessorized with a baby bottle and blankie seemed to be the new must have “designer label” outfit. A baby is not a THING! In fact you were once a baby too — must I remind you of that? No matter how someone might try to refute it, why did all these stars suddenly at the same time get pregnant out of wedlock? One reason could be to hold onto their man. But that raises another question: do women nowadays have that desperate of an urge to overturn their lives just to hold onto one person that they shouldn’t be with in the first place if the only way you can have them is by locking them down through fatherhood?

With Twitter, reality shows, and YouTube being vehicles of one-ticket trip to fame, the insanity over fame is like the new compulsion for wealth. Do these celebrities not know that fame is fleeting? Having a baby is for the rest of your life. Choose wisely my desperate celebs — which will it be? Fame? Or the rest of your lives?