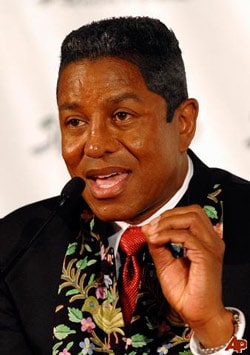 When making a quick buck becomes the imperative.

It’s not everybody who can say that their brother happens (or as in Jermaine’s case- happened) to be an iconic pop star. That said wondering how to make some extra cash with Christmas around the corner Jermaine with all his wisdom has decided to put together a Michael Jackson Tribute (could this be an original idea and who inspired it- older brother Tito or ‘I told you so’ sister LaToya?).

The show to take place in Vienna, Austria (naturally the Austrians are the most stupid people in the world) is currently being billed (with current exchange rates) from anywhere from $78 to $702 (guess which tickets Jermaine wants you to buy?). The problem- no one has bothered to commit performing. Instead what Jermaine has told you is that such and such has been asked to turn up and perform but no guarantees have yet to been made.

So for instance if I was in the mood to sell you a car I might tell you upfront that the car may or may not come with tires, an engine or even brakes otherwise because it’s Jermaine selling you the car your ass should be very happy to buy that car and pleasantly surprised the day you go and collect it.

“Jermaine Jackson and the producers will make every attempt to present some of the world’s leading artists, however there is no right or legal claim whatsoever that certain artists will perform ‘The Tribute’,” according to the site. “All ticket sales are final. Any refund or discount due to the performance or non-performance of a specific artist is hereby explicitly excluded.”

In any event it’s a show we think is going to be a sell out (it may explain why Larry King’s wife Shawn pulled out) and if you hurry up and get there before anyone else you might get to have the whole concert arena between yourself, Jermaine, Tito and maybe LaToya if she’s in a good mood.

Making money off your dead brother is a good idea but most of the time it isn’t.