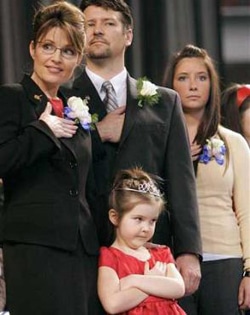 Out in Associated Press today are the unbelievable details of public nuisance at large – Sarah Palin who has been able in the space of less than a year has been able to reinvent herself from illiterate, pedantic embarrassing and mildly confused individual responsible for the care of vulnerable Alaskans to that of pedantic, grossly confused individual responsible for the complete cynical entertainment of every literate able bodied American.

Billing herself as a renegade politician who bucked Washington (which she apparently despises and eschews – of course that all changes when lots of money and book deals are thrown her way…) Palin who had the good fortune to help former presidential candidate John McCain lose his bid for national office and consequently become a national laughing stock while of course Palin (a former cheer leader, model and bear hunter ) herself rose above scandal and confusion to now being a free entrepreneur who apparently commands top billing at publicly illiterate affairs where people pay top dollar supposedly to ogle at Palin and wonder in disbelief how individuals like her rise to prominence.

That said we decided to have a think among ourselves and we listed the following 10 subjects Palin should consider writing given that she has suddenly overcome her illiteracy and shyness from big money, big business and of course big government.

In the mean time Sarah Palin’s book “Going Rogue: An American Life,” will be going straight to hard cover and we assume into your valued library set….

Other books on the horizon include…

1/ ‘Sarah Palin – going for broke with a torpedo gun.’

2/ ‘Sarah Palin- how I hoodwinked America and got paid for it.’

3/ ‘Sarah Palin- my dinner with Vladimir Putin over one fine clear crystal morning.’

4/ ‘Sarah Palin- the secrets of becoming a high school sweetheart.’

5/ ‘Sarah Palin- the secret of how to marry your high school sweet heart and intimidate him into submission.’

7/ ‘Sarah Palin- why the left wing media is a right wing conspiracy.’

8/ ‘Sarah Palin- why the right wing media is a left wing conspiracy.’

9/ ‘Sarah Palin- how to apply make up and other beauty tips.’ Co written with Katie Couric.

10/ ‘Sarah Palin- My Thanksgiving tips to make your life better and more entertaining.’ Co written with Bill and Hillary Clinton.