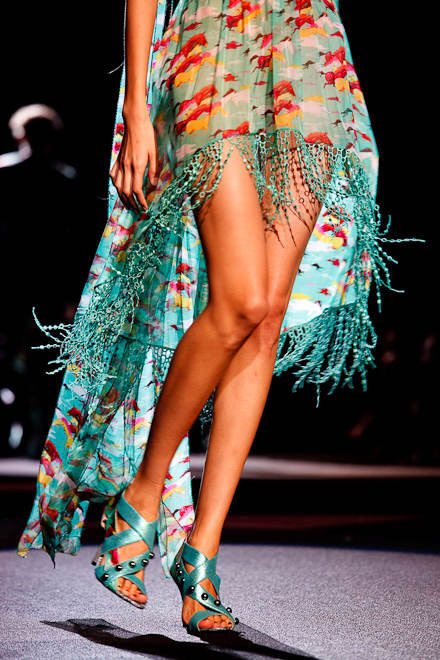 Coming to Custo Barcelona’s 2010 Spring Collection here at Bryant Park was widely anticipated to be one of the most exciting shows of the IMG Mercedes NY Fashion Week. So widely anticipated that I later learnt that it turned hundreds of standing guests away.  Before I continue, let me warn you now, for those of you who missed this collection you missed by far one of the most sophisticated, compelling and emotionally vivid shows of the year. What Custo ostensibly gave us wasn’t in the end just a refraction of his countries many distinctions, legacies and influences but the overwhelming desire to live vicariously through color, history, experience, lifestyle and the panache that draws people to ultimately live beyond themselves.

Now the show; with theatrical aplomb the girls started pummeling one after the other, but unlike other shows we have seen, these girls could be seen to be feeling every fiber ensconced on their torsos, and rather than pounce through, they glided through like ethereal  vixens transplanted from a myriad of instances-

Moorish and jewish patterns, intricate and perpetually repeating, as if artifacts stolen from the walls of the Alhambra palace.  With the contrasting piece along the bottom of his fire cracker emblazoned train drops, to his staccato criss crossing diamond oblongs Custo Barcelona tries to tie the many cultures of Spain’s complex history into a single outfit and succeeds.  And the model’s hieroglyphic grace, transcends it all. 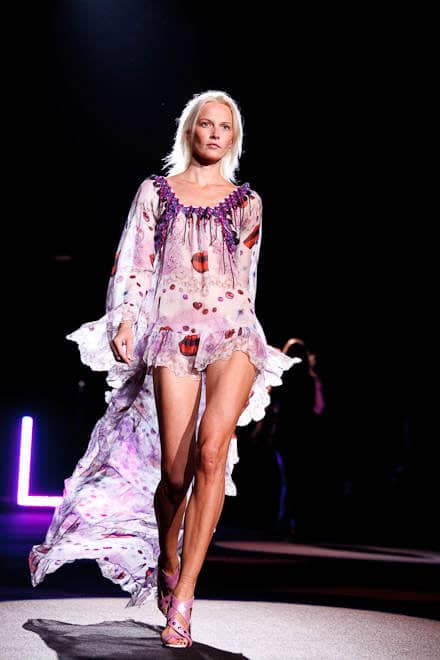 Continuing with his vivid orchestration one also feels refractions of Salvadore Dali, with a sense of the surreal and parody, the clothes hint at a preferred idyllic lifestyle at Hugh Hefner’s Playboy mansion or the canals of some bon vivant hacienda where young and old strut and play glamour – not so much for me and you but for themselves.

With a modern take on the flapper dress Barcelona continues to pay homage to the decadence and the fierce passion for life that inspires him. With svelte chiffon cut suits for him and the accompanying knee high shorts and trendy sneakers one is immediately seduced by the type of lad who would have the natural courage to dress this way. But really what choice does he have when decadence and a penchant for scandal and Playboy models is his operandi?

The girls with their detailed colorful shoes, and fuchsia, multi dimensional weaving and coloring and omnipresent collage really hit the turf running, if one looked close one would tremble at the sight of the silhouette that shadowed Barcelona’s train wreck as it glided through. Whether at some 1950’s Hollywood beach outing or sashaying through Barcelona’s complex Las Ramblas this girl was destined to fall in love and have those around fall in love with her.

Kudos to you Mr. Custo Barcleona!

Special thanks and gratitude to Keith Lew in his comments which were used in this article and for his stellar photography. 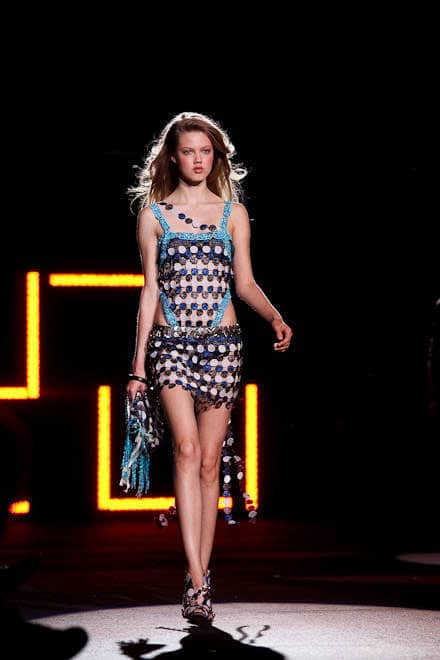