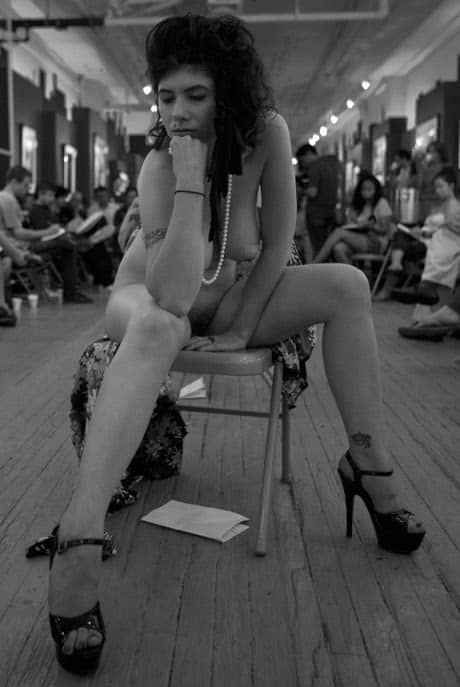 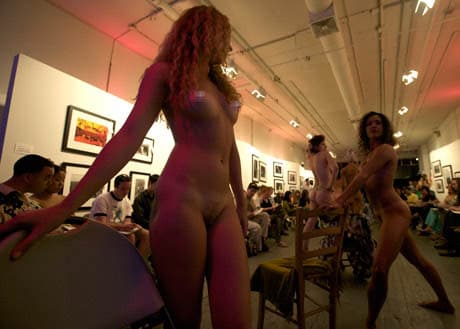 Artists 4 Israel’s 5th (S)kin Life Drawing workshop was a massive display of rock and roll style perfected imperfections, advocacy and chaotic, glorious, achievement. Art and advocacy competing to trump one another, (S)kin is subtlety of message meshed with intensity of delivery, personified, stripped naked and painted with brash, confident brushstrokes across a canvas of purpose.

Hosted by the Morrison Hotel Art Gallery, a sprawling space currently celebrating the mania of Woodstock and the former home of CBGB’s kinetic, fuck-you, punk ethic, it was a daring choice of venue. Double the size of previous (S)kin rooms and unwieldy and disorganized, the room and its history of rebelliousness threatened to overpower the organization and its work. But, Artists 4 Israel continues to prove itself as daring and nimble as the rock stars they celebrated at this month’s (S)kin.

Within 20 minutes of opening the doors, the room was packed. Not yet fans, the 100 plus soon to be art students were curious and energetic, a melting pot combination of pretty little things, dirty little punks, trendy little hipsters, thugged-out little hip-hop heads, Jews with little yarmulkes and, even, for the first time, a little bit of the older, sophisticated audience, the avant-garde of Israeli advocacy and philanthropy who are beginning to take notice and give respect to this daring newcomer. It would be impossible to be a child of the 60s, to be born with the spirit of revolution and liberation, the power of the youth, and not be moved by the work of Artists 4 Israel. Those who came, curious and hopeful, left as fans.

Four rock bands headlined an arts class. 5 nude models headlined a rock show. Pabst Blue Ribbon sponsored an advocacy event. Toma Vodka sponsored an Israel event. None of the proper equipment worked. None of the connections made any sense. Exactly as it should be when you have power and justice on your side. As punk taught us, polish is the disguise of the boring.

Moon Motel went acoustic, connecting personally with each member of the audience as he played while walking through the 100 plus people, a vagabond artist earning his keep. Mike Edison screamed dirty blues. Naomi Less led a crazy sing-a-long about how crazy we all are. Bobbie Grei blew the audience away before announcing Sarah Brega, the creator of (S)kin who gave an introduction to how she, a blonde-haired, green-eyed Episcopalian from Massachutes came to preside over the nude bodies and naked messages of Israel advocacy. She is a student of design and now, she is a teacher of truth.

Artists 4 Israel cancelled the planned 6 minute movie they made themselves, describing the marriage of Israeli freedoms and American rock. Instead, each model, stripped naked, except for extravagant hair and make-up indicating their rock alter-ego, delivered the story of the artists they represented with clear voice. Their naked bodies demanded attention, but the stories demanded respect.