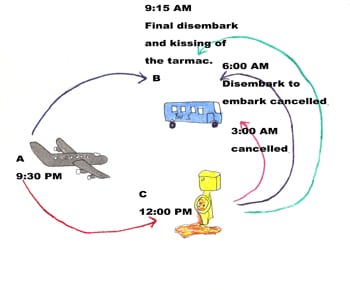 Here are the facts, let’s try and go over them together and see what we manage to come up with.

On the way to point B plane is diverted to point C (see above map) Rochester, 85 miles south of point B because of severe weather storms. Total time in transit so far 2.5 hours aprox. Arrives at point C at midnight.

At point C the plane is offered a ride on a courtesy bus that will take 47 passengers to final destination – point B. Flight dispatchers decides to pass up on offer.

Flight dispatchers now decide to wait for the storm to clear and fly remaining distance between point B and C.

In the meantime single toilet becomes over flooded and over used. Smell of diapers invasive and food and beverages and pillows all gone. Two hours passes…

2am – the plane is given permission to take off again but storms suddenly kick in again.

2.30 am – passengers are given false hope that they will be let out of the their tin can. Turns out to be false hope as airport workers have all gone home for the night

3.30 am – passengers told the bus is ready to collect them.

4.30 am – passengers are now told bus is not after all ready to come and collect them. Smell of over laden toilets and sound of crying babies persist.

5 am- passengers now told that the plane is ready to take off, except it can’t because the flight crew has now worked beyond what is legally acceptable of them. Air crew removed and new air crew flown in.

6.am – Passengers told to disembark so they can re embark the same flight and same stinky full toilet later 2 and half hours later.

8.30 am – plane takes off and passengers finally arrive at Houston at point B at 9.15am half a day later

9.30 am – 47 passengers stumble into Houston airport forever pledging to never fly Continental ever again and with fevered tears of jubilation and disbelief at eventual

The moral of the story life? Sometimes life sucks and you have to suck it up…