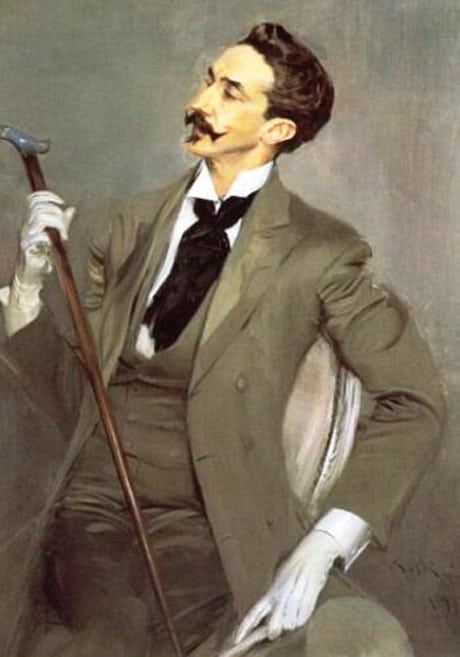 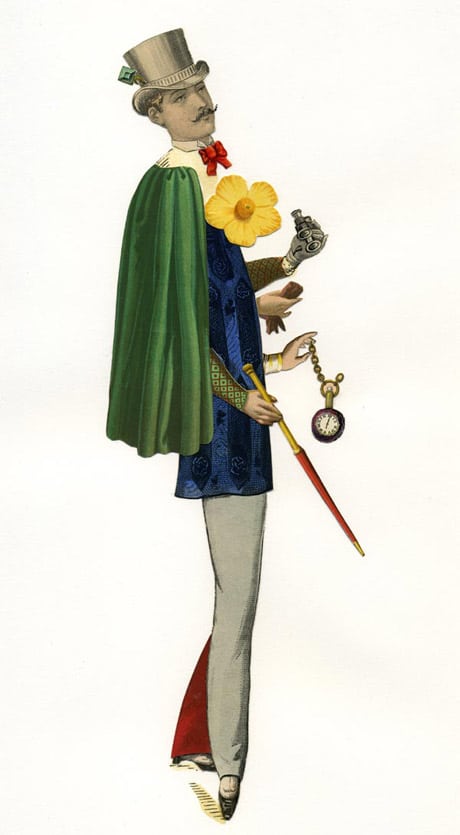 Elegant, fashion-forward, and constantly in the know about the latest designer, Kimball Hastings is averse to the term ‘dandy’. At 28, Hastings is the wunderkind editor of Teen Vogue ; homosexual and effortlessly chic, Hastings is nonetheless utterly against being referred to as a dandy. His reasoning : “I don’t like flamboyance .” (Paper Magazine). If Kimball Hastings isn’t a dandy, who is ?

A movement that dates back to the late 1700’s, dandyism emerged in London during a time of industrial change and the beginning of the modern era. George Bryan (Beau) Brummel was the indisputable father of dandyism and his fastidious manner of dress and aura of refinement was quickly adopted in France. Though Hastings refers to a dandy as someone who is “flamboyant,” Brummel’s mantra was one of refinement and restraint. Above all an aesthete, a dandy is refined in all things regarding his person : his clothes, his motions, his wit and his tastes. (Chevalier d’Hamilton). Appearance is paramount but insufficient ; the dandy must also cultivate his intellect, his cerebral sophistication along with the numerous pairs of shoes and three piece suits that he will invariably acquire.

Dandyism came from England to France in the 1830’s and quickly attached itself to modern movement of literary, aesthetic, and philosophical ideals. Absolute monarchy is replaced by absolute modernity as the intellectuals of 19th century Paris embraced this new era of ideas, novelty, and dandyism. Beau Brummel’s philosophy on clothing and manners of etiquette was adopted by France where it interestingly gained popularity in bohemian circles. There, dandies sometimes were celebrated in revolutionary terms : self-created men of consciously designed personality, radically breaking with past traditions. With elaborate dress and idle, decadent styles of life, French bohemian dandies sought to convey contempt for and superiority to bourgeois society.

Wikipedia’s definition of “Dandy.”- Dandyism as a rejection of bourgeois values was seamlessly integrated into French society in the aftermath of the French Revolution. In rebellion to the bourgeois class, the artists, poets, and intellectuals of Paris espoused the values of the self-made man. Though the dandy must have somewhat of a disposable income, he was not an aristocrat. He was a man who regarded himself as an un hewn marble on which to chisel his ideal. (Chevalier d’Hamilton).

Both the bohemian and dandy movements were based on the belief in their superiority. For the bohemians, it was their superiority as artists ; for the dandies, it was the superiority of their refinement. His snobbery about fashion came not from pedigree but was self-created. Charles Baudelaire, the ultimate emblem of modern, bohemian Paris, was also the ultimate dandy. Dandyism had no connection to flamboyancy or frivolity; for Baudelaire, it was tantamount to spiritualism.

“Clearly, then, dandyism in certain respects comes close to spirituality and to stoicism ; a dandy can never be a vulgar man.”(dandyism.net)

Baudelaire, simultaneously a dandy and a bohemian, was fascinated by the artificial : makeup, theatre, etc. Because they lacked noble blood, dandies were like actors living out fantasies that could never come true, adopting outward characteristics that aided in this public and personal deception. (Bohemianism and Counter-Culture). Dandyism and bohemianism were parallel movements that occasionally overlapped ; though seemingly contradictory, they shared certain similarities. Bohemians and their cafe culture, and dandies and the exorbitant amount of time spent at their toilette, perpetuated a dual element of idleness and creation. A journalist during the Second Empire, Philibert Audebrand remarked of the two classes :

“If they shared the same kind of life, that is the same chance existence, the same love of inactivity, the same appetite for celebrity; however, while dandies were handsome and given to elegance, bohemians prided themselves on being ugly and affected a careless exterior.” (Bohemianism and Counter-Culture)

An adherence to elegance and refinement continued to reflect certain aristocratic elements, however, the dandy as a self-made man was a revolutionary concept that marked a significant change in political and aesthetic ideals. Paradoxically, the original dandies were not on the side of the revolutionaries; dandyism was initiated by a propensity to dress in an aristocratic style in order to distinguish its members from the sans-culottes. Dandyism has always maintained a connection to the elite- in manners of refinement and etiquette- but it also gained significance in the Parisian bohemian movement and the commencement of the modern era. Thus, the image of a dandy is that of paradox: they tend toward nostalgia, but in a manner that is always ahead of its time ; the dual embodiment of conservatism and transgression. (Freize Magazine)

Dandyism in the US did not become a true pop culture presence until the 1930’s when Hollywood embraced a different kind of male hero. This new leading man was suave, refined, and decadent; in other words, a dandy. During the Great Depression, audiences could live vicariously through these dandies of Hollywood; the “Golden Age” of film. The plethora of musicals, screw-ball comedies, and happy-ending gangster films consistently had a dandy as the heroic male. Not only could American audience experience a kind of escapism through the modern dandy, they could also connect with him. The embodiment of refinement, the Art Deco dandy was nonetheless emblematic of the changing class system due to the Great Depression. The dandy belonged to a self-made aristocracy, “grounded on the principles of leisure, performance, and good taste rather than mere lineage. “(Drew Todd, Journal of Popular Film and Television)

The American dandy is reminiscent of the Parisian bohemian dandy of the 19th century in both an adherence to a self-made image as well as a frequent mockery of bourgeois values and high society. The 19th century European dandy and the Art Deco leading man triumphed over social situations through personality and style. The image of a lower to middle class character outwitting a member of the bourgeois class (as seen in the 1932 film, Trouble in Paradise) was very appealing to Depression-era audiences. (Drew Todd). While the European dandy of the 19th century prided himself on his cultivation of a self-made intellect and style, the Art Deco American dandy was perhaps less ‘intellectual’, and more ‘street savvy’. The American cinematic dandy was one who could not be categorized ; he crossed boundaries of gender, class, modernism and aristocracy, coming out on top all while maintaining an impeccable appearance. The American cinematic dandy of the 1930’s was both limitless and liberating.

The presence and popularity of the dandy in American pop culture has fluctuated as the masculine ideal continues to be redefined by the mass media. The femininity of the Art Deco dandy was tempered by the countless women he would seduce. However, since the1930’s, the image of the dandy has been distorted into a synonym for homosexuality. The 21st century has largely been defined by an obsession to define sexuality, not just what it means to be ‘masculine’.

The American masculine ideal has ranged from Fabio, the long haired, overly muscular model who graced so many of the romance covers in the late 1980’s, to the 21st century creation of the “metro-sexual.” Coined by Mark Simpson-a British journalist- in 1994, the term “metro-sexual” appears to be America’s 21st century response to Brummel’s dandyism of the 19th century. A preoccupation with oneself appears to be the common bond between the dandy and the metro-sexual. Simpson defines the typical metro sexual as “a young man with money to spend, living in or within easy reach of a metropolis- because that’s where all the best shops, clubs, gyms, and hairdressers are. He might be officially gay, straight, or bisexual, but this is utterly immaterial because he has clearly taken himself as his own love object and pleasure as his sexual preference.” (Salon.com)

According to Guy Babineau, a Vancouver journalist, the term metro-sexuality is not America’s 21st century definition of a dandy, it is merely a “flickering holograph” (straight.com) Contrary to the dandy who cultivates both his wardrobe and his intellect, a metro-sexual is defined solely by his adherence to accessories and devotion to taking care of his physical appearance.

If the masculine ideal (both American and European) is dictated by the ever changing trends on the haute couture runways, the recent popularity of androgynous models might suggest yet another shift of how we define masculinity. An article in the February 7th edition of the New York Times observes that the male silhouette on both European and American runways has been recently and drastically reduced-

“Where the masculine ideal of as recently as 2000 was a buff 6-footer with six-pack abs, the man of the moment is an urchin, a wraith or a underfed runt.” 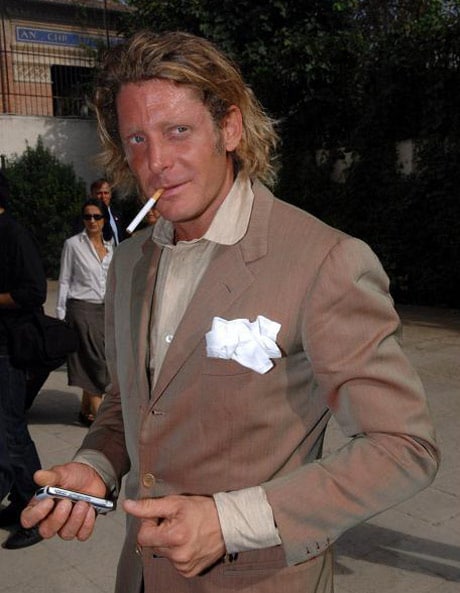 Demian Tkach, a 26-year old model from Argentina, notes that when he came to America, he was informed by his agency to lose some muscle. Though he does not use the word “runt” to describe this phenomena, Tkach concedes that the masculine image has definitely changed,

“I lost a little bit to help them, because I understand the designers are not looking for a male image. They’re looking for some kind of androgyny.” (New York Times).

Though the original dandy embraced the idea of the self-made man, he nonetheless continued to adhere to aristocratic ideals. This can oftentimes be interpreted as pretentiousness. My own father has been called a dandy for his meticulous way of dressing and his decision to include only « highbrow » books in the Los Angeles Times book review section. According to one blogger,

“Speaking of the L.A. Times, its book editor, Steve Wasserman spent 12 years in the New York publishing world before returning to his native city to become a tireless cheerleader for the L.A. book world—if cheerleader is the appropriate word for someone who could easily be mistaken for an 18th century dandy (I’m always surprised he doesn’t wear a monocle and an ascot). Seeming to scoff at the notion that book sections ought to cater to books that people actually buy and read, Wasserman’s weekly pull-out section is the most highbow on the American newspaper front.” (morningmeeting.org)

The affected manners of a dandy– whether it is Brummel or Wasserman- can be interpreted as pretentiousness ; however it is not to be confused with flamboyance. Perhaps Charles Baudelaire put it best:

“Contrary to what a lot of thoughtless people seem to believe, dandyism is not even an excessive delight in clothes and material elegance. For the perfect dandy, these things are no more than the symbol of the aristocratic superiority of his mind. Thus, in his eyes, enamored as he is above all the distinction, perfection in dress consists in absolute simplicity, which is, indeed, the best way of being distinguished.”