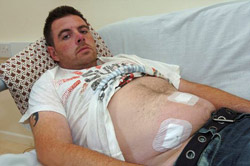 The things that happen in hospital rooms…

Welcome to the unfortunate year of Englishman Mark Watson’s life who as a consequence of inept and mysterious medical work has come to find himself out of work, in constant pain and wondering religiously what it is they took out instead of his appendix which ended up rupturing 4 weeks later when it was no longer suppose to be there.

Mark Watson first started experiencing excruciating abdominal pains earlier this year and was relieved when he was told it was his appendix and subsequently had them removed. So he thought. The fun of course began a month after surgery when Mark started to once again have abdominal pains and rushed to hospital. Rushed to hospital to only find out that indeed his appendix had not been taken out and that it had suddenly ruptured and that he was forced to go through a life saving operation.

The operation, or rather that operation turned out a success, but Mark to this day is still unable to find out what happened during the first operation. One could speculate perhaps part of his lung, kidney or other useful organ was taken out but as of yet Mark has not been given any answers ( at least they didn’t saw off his leg or arm right?)

For his troubles when Mark returned to work he was told he had been let go as his employer had now come to perceive his absence as proof of his non committal.

That said as we speak an investigation has commenced and Paul Gearing, deputy general manager for general surgery at Great Western Hospital NHS Trust, has been able to offer the only public comment- ‘We are unable to comment on individual cases.’