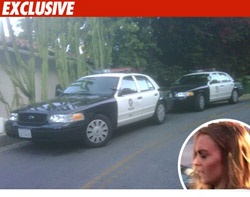 Out of LA we learn from smut reporter TMZ that now Lilo’s house was broken into and maybe it was an inside job, which can only suggest now not even her employees don’t like her.

The facts- returning from a disastrous trip(hangover) from NYC back to her home in LA, Lilo to her dismay discovered at the dull hour of 3 am this morning that her home had ibeen broken into with a safe being ripped off the wall along with some watches (we’re too scared to even wonder what was inside the safe given our group discussion about what numbers we thought were in her missing Blackberry).

With daddy Lohan by her side, papa then called the LAPD who came on down to check the scene and of course somehow let smut journal TMZ know (which begs the question are there little cameramen sitting every minute of the day in front of Lilo’s home or does Lilo have some low level employee like her dad make the official call to the press who no matter how much Lilo by now can’t stand knows she needs more than ever..?) and of course keep us forever in the loop on the very important aspects of a 22 year old girl who we should all be caring vehemently about.

In any event it’s been a shitty week for Lilo, and we’re betting there will be many more (if she were a stock this is the time to sell) but then again do you really care?

Of course you do!