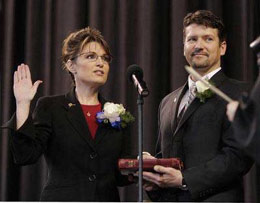 Celebrity divorces and how will you survive?

It’s no doubt by now but the Palin entourage has long ceased being a political platform and steadfastly has grown into a tumbleweed of TV outings and celebrity infused meanderings. That said, this weekend’s meanderings and celebrity trivia has it that the Punch and Judy gang from Alaska are about to call it a day. That’s right, you’re favorite all knowing, bible thumping, photogenic and slightly confused (but media savvy) couple from the icy uptown are looking as if they are heading to splitsville.

According to the Alaska report, (honestly who can vouch for their credibility, but then again who can really vouch for Palin’s credibility in the first place?) the dynamic duo have had enough of each other (ironical isn’t it- since most of America also had enough of them too…).

Validating the story(rumors) the report sights numerous local confirmations (un named of course) , that Sarah has ceased wearing her wedding ring in public and that after last weekend’s resignation outing, Sarah was seen leaving without Todd to where ever it was that she was leaving. (ok?).

The report further goes on to say that Todd will go back to the oil fieds (not Hollywood?) and that Sarah on the other hand will be moving to Montanna with the kids and her 11 million book deal (thank you very much).

In any respect we all wonder (not really) how you will handle the shocking report that Sarah is now moving on to bigger and maybe wilder things and whether this all means that the celebrity meandering will soon morph into the Sarah Palin late late night horror show.

Of course it wont, but it wont stop you from watching if it did. Ahh the ‘fun’ things going down in Alaska…