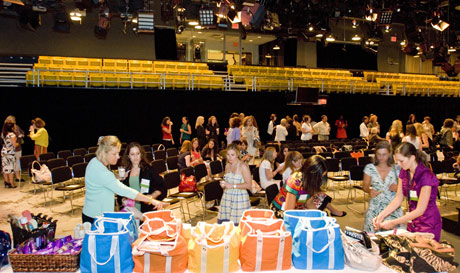 Perhaps I’ve already betrayed my low (and subsequently far surpassed) expectations for this event. This stems from an inherent and probably unfair aversion to stand-up comedy. Yes, the dislike of stand-up comedy is probably unmerited, but I posit that anyone who’s ever worked in an office close enough to Times Square to be accosted by cargo-pants-wearing comedy barkers shouting “Hey! Do you like to laugh!?” at every lunch break surely shares my knee-jerk loathing of all things stand-up. No, dude, I don’t like laughing, are you satisfied? Now let me buy my gyro in peace.

Believe it or not, I actually do like to laugh (shocker), and the event’s generous open bar made that even easier. About two-thirds of the all female crowd was of the over thirty five set which made the pre-show networking hour pleasantly unself-conscious. It was quickly obvious that this was a room full of communications professionals, the more experienced of whom were happy to work the room to make newcomers feel welcome.

All six of the comediennes were quite good, and even event host and emcee Linda Kaplan Thaler was comfortable cracking a few jokes of her own on stage. Speaking of the stage- was it mentioned that this event was held in Rockefeller Center’s legendary Studio 8H of Saturday Night Live fame? How cool to be able to order a drink from the bar located atop the stage where hundreds of musical guests have performed.

As the third performer did her set on the stage where countless celebrities and (always abysmal) athletes have done their SNL monologues I wondered if any of them would ever be famous enough to take this stage again, only on a real Saturday night. After all, most stand-ups really only ever talk about the same few things: dating and marriage, family drama, and jokes about race seem to be the universal staples, so it must be hard to be a stand-out-stand-up and still give the audience what it expects.

Proceeds from the event went towards a scholarship foundation for women working in communications. Several young winners were in the audience, and I get the impression that if you want to be the next Meredith Vieira or Campbell Brown, this is the organization to belong to. Scholarship opportunities, fun events, and a chance to meet women at the tops of their businesses? What else could an aspiring communications professional ask for?