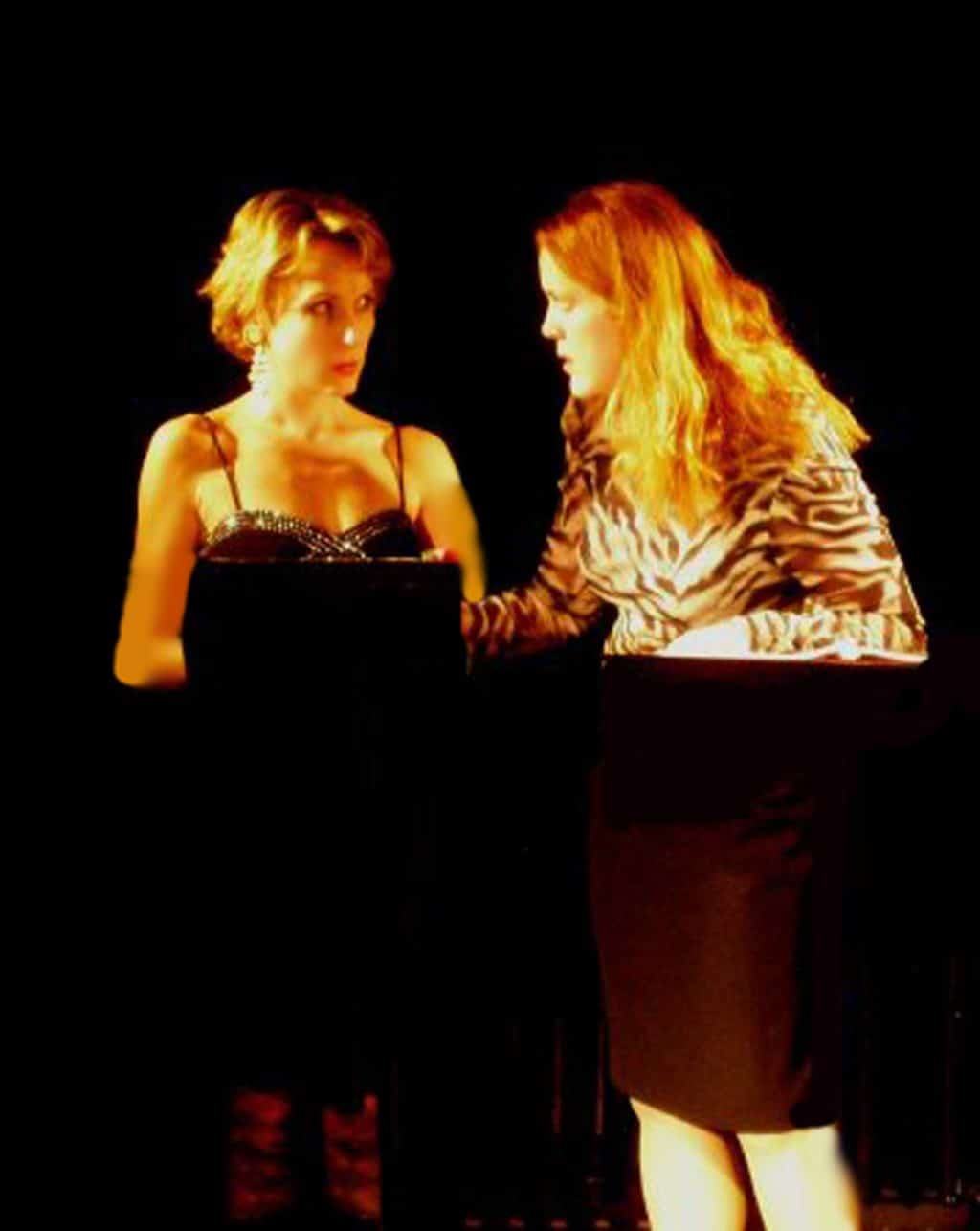 The Midtown International Theatre Festival celebrated its tenth anniversary season at the Bleecker Street Theatre, yesterday Sunday, June 28. On the cobblestone corner of Bleecker and Lafayette stands the theatre, with gold spray painted numbers to indicate its presence because, other than posters from various plays tiled along its front windows, a stranger might miss is – the heavy metal doors and standing bar visible through cracks in the poster collage imply to any passersby that 45 Bleecker St is a cafe and not a theatre.

The woman perched at the ticket table looks slightly confused but nonetheless joyous at all times.  She ushers me into the front room of the Bleecker Street Theatre whose coffee table chairs have crocheted blankets immortalized under plastic encasings and glass tabletops. At the bar are platters of shrimp cocktail, postcards for the festival shows, three dollar wine and two refreshment workers dressed in colorfully patterned clothing and enthusiastic grins. It’s neighborhood theatre, for sure. Not only have I frequented countless plays in such laid back, easy going theatrical environments wherein, for example, two cast members from other festival shows trounce around the refreshment area in full costume promoting their plays – I have performed in them. Many of them. Enough to know that the gargantuan risk of ambitious black box theatre is its unfortunate tendency to allow the laid back, easy going quality of the front refreshment room to invade the performance space and so rob the playwrights of their public integrity.

Here’s why the “chill” vibe becomes tricky in theatrical situations: Open mics don’t exist for theatre for a reason. It’s charming to crawl into a packed bar and watch some unknown, raggedy fellow bang out his soul on a wooden guitar while you knock back a shot with your friend from work. What isn’t as charming is this: Excitedly entering a one to two hundred seat theatre, waiting half an hour, and watching extremely heartfelt but nonetheless slightly mediocre performances.

The enthusiastically named, “The Sky’s the Limit!” launch party exhibits short previews from eight of the longer works involved with the 2009 festival with a cast of some equity, some non-equity actors playing out short scenes and musical numbers in the beautiful space that is the two hundred seat Bleecker Street Theatre. Unfortunately, the laid back vibe did invade the artwork in a less than fantastic way. Yes, low budget theatre often requires that actors accept their inability to rehearse in the actual performance space and easily access their props, and The Midtown International Theatre Festival takes this aspect in stride with its casually dressed, comedic host and offering of raffle tickets. However, a lack of professionalism within the work prevails and reflects strangely upon the eagerly ambitious playwrights, actors and crew involved in the festival. Theatre demands a sense of seriousness at some point in the night. Theatre, by nature, is difficult; it requires an audience to willingly suspend their disbelief and succumb to the stories at hand. If this does not happen, the stories are nothing more than spoken words and interesting movements without soul-stirring depth or intrigue – an awkwardly spent night out.