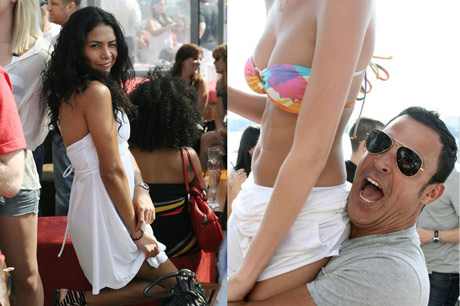 If anyone has had the pleasure of spending their afternoons smashing their brain cells to champagne, rubbing their oil slicked backs up against a cavernous boom box (not to mention another oil slicked body, the type of course you only wish was around when you needed it) and squinting their eyes along an azure Mediterranean coast then they will understand when we tell you that party wiz kid and hunk (so they tell me… ) Matthew Assante and his partner – Dustin Terry, have just blown the party scene as we know it in NY out of the water. Literally and of course figuratively…

It’s a little past three on a balmy Saturday afternoon and we’ve just spent the last fifteen minutes zig zagging yellow cabs, bristling passer bys and the onslaught of the mob who have descended on their weekend ritual  to the meat packing district. If we had half a brain we would have stayed away, or better still, seeing as this is summer packed and booked for one of our idyllic get aways anywhere along the Mediterranean coast line. That of course is all wishful thinking and as much as we’ve been known to be fond of the Hamptons we know to stay away when the hordes come out to play. That said when poster boy to the glam and indie crowd Matthew Assante suggested we come out and check out his new boite over at the Gansevoort Hotel we glumly acquiesced and looked for the sturdiest pair of sunglasses we could find. 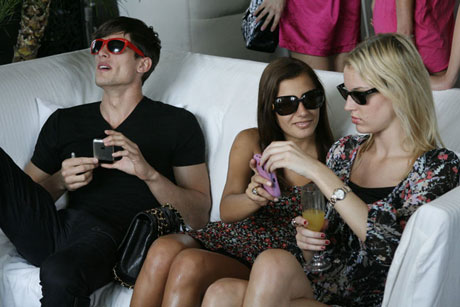 So there we are having just walked out of the elevator a prism of sharp white heavenly light enveloping us in the disco groove that was by now gaining stardust altitude. To my left a parade of well coifed nubile beauties that I’ve been noticing on and off on the latest fashion covers and down the labyrinth hallway on the west wing (it’s all 360 degree here dears) I come across the affable collection of near naked boys, near naked girls and of course the almost always near naked ‘cowboy man’ of Times Square fame. Lifting my sunglasses to get a good look I am then greeted by the shrill of Princess Hilton (so he tells me ) and the idyllic stare  of super model Marcus Schenkenberg who is pretending that he’s seen it all before.

Turning back inside I am immediately struck by the camaraderie  of the guests. One gets the impression they all somehow know each other, regularly party with each other and at some point in their lifetimes wiped away each others tears. The funny thing as I am soon to find out is that these kids (for a lack of better word ) do all know each other and by all accounts enjoy each others company.

I am now sitting standing, jostling, shaking and jiving to some wonder kid called Shukas who wields a saxophone the way an axe murderer wields his weapon. The whole room is going ballistic and as much as you think it’s Dizzie Gillepsie turning you on, it’s the crowd anointed genius ‘Shukas’ that has got you thinking that the summer you had back in Ibitha, Mykonos or St Tropez back in 1993 is somehow being replayed. The truth is it is being replayed and without necessarily meaning to you are viciously shaking your ass to the beat, smiling from one side of sunshine to the other while God kisses you gently on your forehead.

From there I am wiping joys of tears that I thought one could no longer find on a Saturday afternoon in the thick of a sultry Manhattan afternoon. Coming across Matt and his affable partner I wonder out aloud how this all came about;