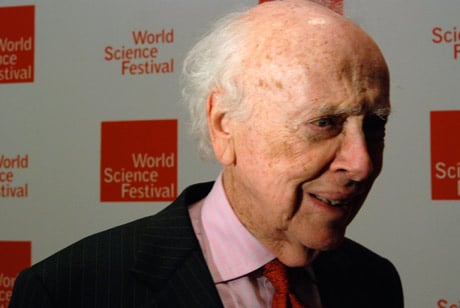 It was Wednesday night at the Opening Gala of the World Science Festival, and everyone in the press line was waiting for Alan Alda. We waited, we chatted, we fidgeted in lieu of smoke breaks. People crowded and shoved. He finally emerged, and amidst a chorus of cries of “Alan! Alan! One more over here!” one reporter (unfortunately not me) managed to get his voice to carry above the crowd and get the attention of Mr. Alda.

“Alan, I just have to ask, what is all this? I mean, are we really treating a scientist like a rockstar? What the heck is going on here?” This man was a reporter for a major news network, and judging from his voice, I think he had been thrown on the science beat after being kicked off the game show circuit. But Alda gamely played along and answered the question with the ironic suavity of Brad Pitt playing a used car salesman. “Well, you know what we’re trying to do here? We’re trying to show just how connected science is to other disciplines, like music, and art, and the theater. There’s this crazy idea that science is separate from all that stuff, like it doesn’t really affect our day-to-day lives. But you know what? I think we took that idea and we killed it tonight.”

The “rockstar” that the reporter was referring to was E.O. Wilson, a pioneering biologist, naturalist, explorer and poet. The gala combined a benefit for the World Science Festival with a celebration of Dr. Wilson’s 80th birthday. The result was a series of short speeches, music and dance performances, and an excerpt of ‘Lord of the Ants,’ a movie about Wilson’s work with insects, group behavior, and what we can learn about ourselves by studying ants. Other “rockstar” scientists in attendance included James Watson, the only living pioneer of early DNA research and one of the creators of the Human Genome Project; and Brian Greene, one of the world’s top string-theorists and co-founder of the WSF.

Probably the closest person at the gala to an actual rockstar was Paul Miller, a.k.a. DJ Spooky, That Subliminal Kid. While DJ Spooky turns out haunting beats on albums like Dubtometry and Drums of Death, Paul Miller’s writing for the MIT Press. His work Rhythm Science is part of their Media works Pamphlets Series and is about the way we arrange our ideas, how we make choices, and how technology and music are tied together. As it’s described in the pamphlet, “Once you get into the flow of things, you’re always haunted by the way that things could have turned out. This outcome, that conclusion. You get my drift. The uncertainty is what holds the story together, and that’s what I’m going to talk about.” Fans can find him on Saturday at the WSF’s Infinite Worlds event, collaborating with Dr. Greene to provide a musical interlude inspired by the idea of parallel worlds.

After the performances ended, the reception began, and it would seem that scientists party pretty much as you’d expect them to. People modestly took only one to two glasses of the complimentary champagne, and I saw several plates of tiny cheesecakes go around the room unfinished. The dessert highlight of the evening was probably the 3” ice cream cones, and even that scholarly audience delighted in pretending to be giants, with hands too big to hold such tiny, tiny cones. The crowd was eclectic, made up of artistic types in Asian-inspired pajamas, a few young 20-somethings in sequined shirts and jeans, older gentlemen and women in three-piece suits and cocktail dresses, respectively, and trendy 30-somethings with English-preppy outfits and dark glasses frames that were more avant-garde than hipster. Also in attendance was the choir of the Abyssinian Baptist Church, who sang the cheesy but appropriate “What a Wonderful World” instead of the gospel music I hoped for as a Southerner.

The World Science Festival runs until Saturday, with multiple events happening each day. 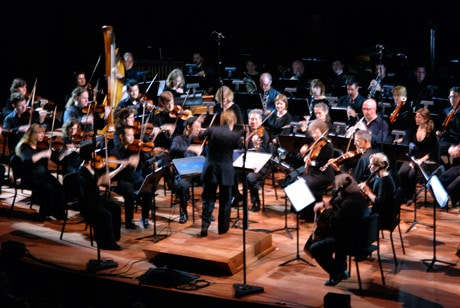