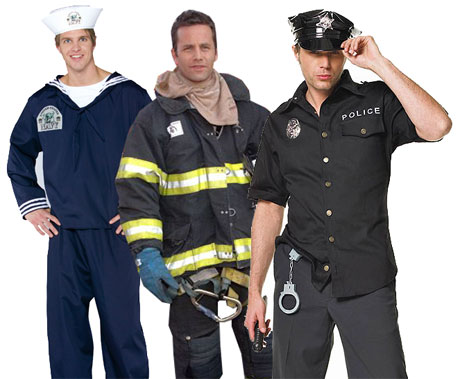 Yes, the fictional Samantha Jones’ favorite New York holiday has come and gone, leaving piles of empty beer bottles and crowds of still-swooning girls in its wake. But what’s the appeal of a man in uniform, and why does a simple change of clothes have such an effect on the ladies?

New York’s first Fleet Week took place in 1984, and it’s been held nearly every year since. It’s meant to be a celebration of the aquatic armed services, and celebrate we do. A quick search for ‘sailor’ or ‘fleet week’ on the Craigslist personals in the last week results in hundreds of hits, with the large part of them being gay men and a few straight women offering to repay dedicated sailors for their service to our country with some sexy service of their own. Troll the Irish bars around Times Square or the douche-baggy sports bars in Murray Hill and you’ll find marauding groups of girls scanning the crowds for dress whites and admirals’ caps. How do I know this? I was one of them.

This was my first New York Fleet Week, and I was psyched to see what the hype was about. We’ve all seen that infamous episode of Sex and the City, whether we admit it or not. And while I’m the last person to see something on TV and believe it’s true, I can’t lie. That episode made it seem like such a heady combination of forbidden fruit, outrageous behavior, and romance that I couldn’t resist dragging a friend out this past week to go sailor hunting.

But what makes them so irresistible to us in the first place? “I think the uniform makes us attribute qualities to them that they may or may not have, qualities associated with the uniform and the job. And those qualities are things that women generally find very attractive,” said a friend during a holiday BBQ. “Men in armed forces uniforms come off as strong, authoritative, capable, responsible, and committed – all qualities that women stereotypically love.” That would explain why we don’t get all gussied up for a visit from the UPS man or a trip to McDonald’s, but showing off a bicep and casually bringing up a job in the FDNY will drop more panties than a trust fund. Mention 9/11 and you’re golden. It’s the tragedy and the romance and the feeling of being with someone that could (and more importantly, would) save you if you were in trouble that makes particular uniforms so attractive.

Plus, like I was told in Times Square by a fellow sailor-stalker, “Have you seen their asses? Hawttttt!”

Research done, I moved on to the hunt. A friend and I began our search in the Meatpacking District and hit every Irish bar between there and Herald Square. Our first sighting resulted in muffled screams and power walking/following, until we realized that the group we were trying to chase down was entering a strip club.

Next we checked a string of likely looking bars, finally finding a group of four sailors that didn’t seem too intimidating. We went up to them and introduced ourselves, and the first thing out of one of their mouths was, “So, what. Are you trying to get laid by a sailor?” The question was valid, and I suppose that, in the right situation, you know…. whatever. But he said it so coarsely and abruptly that I might actually have blushed. The conversation continued with lame attempts at flirting by one, question dodging from another, and looks of understanding and pity from the female sailor at the table. It was no different from being hit on by any other fratty guy in any other bar at any other time in New York City. Backhanded compliments, unwanted physical closeness, offers to buy drinks followed by an expectation that you’ll be coming back to his place afterward. Except that these sailors were working security on one of the ships on display, so they had 2:00 AM curfews and had to follow the buddy system.

Other encounters were much the same. Dull conversation, a sense of entitlement, and a general lack of concern for the outside world characterized most of the people we met that night. That’s not to say that all sailors are like this; I realize we were meeting exactly the type of people who would be out boozin’ it up after midnight on a school night. There may well be servicemen who live up to my fantasy ideal. But in real life, they can be disappointing. Look a little closer and you’ll notice the wrinkles in their shirts, the dirt stains on their pants, and the fact that only the officers seem to get uniforms that aren’t too short, too long, too baggy, or too tight. And if I’m honest with myself, the sailor uniform reminds me of Japanese schoolchildren. Not in a hot schoolgirl kind of way, but more in an “Oh, my nephew in Hong Kong has that exact same outfit!” kind of way.

Everyone knows that iconic photo taken in Times Square on V-J Day, when WW2 was declared over. A sailor in a black uniform dips a nurse in white and kisses her while others look on and celebrate the end of the war. It seems like the romantic dream of a man in uniform come to life. But in the course of researching this story, I read that that sailor was running around the streets, kissing any woman he could get his hands on, old or young, fat or thin, married or single. And after the kiss was kissed and the photo snapped, the nurse slapped him.