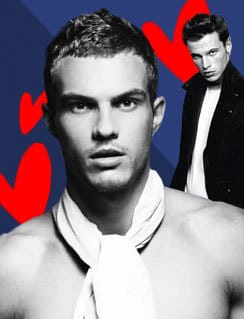 You know should not do it, but let’s not kid ourselves. People are tempted and whether out of boredom, spite, curiosity or burning loins of passion, cheating happening even if it is not the mainstream choice. Getting a taste of forbidden fruit is just what some people want. Though we do not promote this behavior wholeheartedly, we are not above the unspoken present philander in today’s modern couples. All we believe is that if you’re going to do it, at least do it with some class. Infidelity is defined differently for each relationship, yet you know when you feel that rush of secrecy, intrigue and desire.

Use this guide to pull it off or source this if you are in the grips of an affair as a guide to carry it off with dignity. You might wonder how on earth I would have such a poignant take on affairs yet have never cheated myself. Enter in the infidelity theory:

I am the face of infidelity. The body too. Not just the one you find husbands taking their rings off for or boyfriends casually forgetting their girlfriends for, but one who knows the power. Words of commitment flow off my pretty tongue while my eyes scan the room for a victim though the real crucifixion is holding my hand. I would like to think I am an honest person yet as I wander the streets in the midst of cat calls and glances or being watched and leered out, only to realize I am the perfect object of affection and everything your partner is not. Though the sick truth lies in that I have the same power. People want to cheat with me and on the same token…I could cheat if I wanted to. I suppose everyone could if they so wanted, yet for me. It is simple. It is too easy. I give one glance, one long eye lashed stare, a twist of the body, perhaps a touch of an arm or a hug…and it could be on. Taking full advantage of those needing the out or those who don’t even want it but can’t stop it either. The thrill is too much. The times when you no longer think but you let your bodies do the talking.

It could be the best for them and the worst for me. This power is one I’m awkwardly aware of, and paranoid of its unconscious consequences. I didn’t mean to make him love me. I didn’t mean to be so attractive I feel like saying. For some, I never thought the excuse “the other person wanted it… not me” was valid as we all can act for ourselves and thus that is why I pull away from any possibilities hard and fast, hence the awkwardness.

Escalating was never slow for me. I could get a make out session as soon as I stood next to my target. I enjoyed it. Walking into a club, surveying, and then getting what I wanted. Taking home my date’s best friend who was with a girl already. Making up stories about where we ended up. Leaving one house to get laid at the other and returning to the first. There is a sad lining to stories like this. Painful to admit that it was all in vain. All out of thinking they could fill some void or being accepting by them meant something. Before long, the infidelity theory came out.

I ended up with nothing after these ventures as that was the role I played. The one they wanted to cheat with. Granted I never was in a relationship of my own during their lapses of judgment or I would have been in my own situation of misconduct. Either way, those I was talking to even casually did not know of my run ins. My run-ins would be wide eyed and seem to wonder what they did. I never heard back, I never tried to reach out either. It was unspoken. What was done was done. And then, I entered into a monogamous relationship and the minute all these opportunities of desire would come my way the “no” was almost premature. It was as if I had to say, Don’t try. I know what I stand for, and I know how easily I could get myself going, so stop. Please. Save me from myself and I’m telling you this to save you…from me.

All the reports of my own meandering trail of sultry stares, dirty laundry, and reasons not to call aside, the issue of infidelity remains a big one. Why do we do it? Can some people do it without meaning to? Who really is to blame or is there no blame than basic human attraction? Though I spend time advising on relationships saying that cheating is a conscious choice made by or perpetuated by an individual, I started to question my own stance. I wanted to believe that all cheating was something we did knowing and the ones at risk were the ones who built their relationships on rocky ground, did not communicate, did not have needs met, and frankly, wanted the thrust of another. (no pun intended.)

Either way, infidelity might not even be called this and might not be sexual. It can be emotional straying. Those are deeper and harder to explain cases of meeting a need in a place it should not be met, while neglecting the place that should be meeting it. The theory only began to take shape when I became overwhelmingly distraught about a relationship that I was trying not to admit was bad. Yes, it was bad. It was a rebound relationship with someone I did not see myself with, yet he tried so hard and was there so much that it just sort of wound up that way. Had we not been neighbors and him not carried it with the time and contact needs of a high schooler without an after school job… we never would have been. It might just have been better that way. The end was coming from the beginning yet I pumped my heart that was full of love even fuller and said, do not be a hypocrite to relationships…makes it work. I did. And I suffered at the hands of my own trying to so hard to make a square fit in a hole.

In the dying months where my voice was unheard and I was berated for even trying to use that voice to squeak out a “hey, I’m not happy with this,” it all started becoming apparent. I could get what I wanted while I had a boyfriend. In fact, the thought alone got me hot and bothered. I wanted that image of a secret lover. Of fast pulses and heavy breathing. Of lips meeting and the warm moist touch sending the “I’m not supposed to be doing this but I like it” running down your spine. Though I would not do it, the moment those thoughts entered my mind a red light would go off. No. Stop now. You’re in too deep, It is too easy for you. Or was it? I did nothing to get the thoughts going, now what if I really tried? The world could be mine.