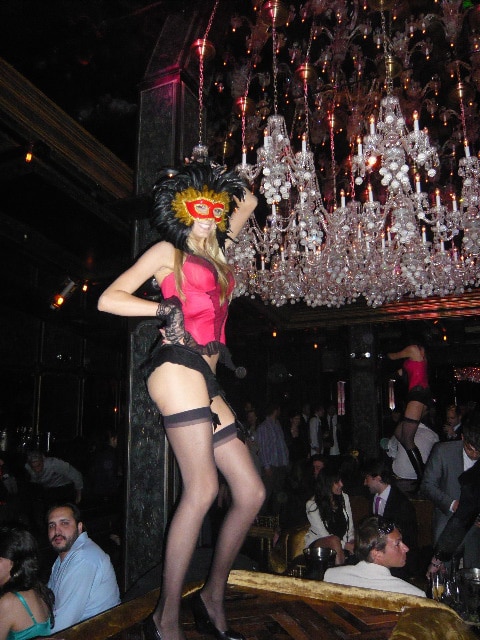 The cancan girls smile at everyone. Pin thin legs jut out from folds of full skirts and snake beneath the knee high stockings of lace which twist seductively into bejeweled heels kissing the floor. Their manicured faces levitate above the throng of well tailored suits and slim figures, shrouded in amber light, dressed in plastic harlequin masks of gold and glitter. They smile because they have been hired to do so, because they are beautiful, and because they are all beautiful in the same way. Yes, the coordinated black of corseted dresses flutter glamorously atop their firm bodies, but their beauty of identical luxurious hair and hard jaw lines is the real uniform here. The required attire is good looks.

Mirrors throw burgundy light from ceiling to floor to wall and back and the interior of The Griffin, a newly renovated, trendy hot spot in New York’s meat packing district, echoes with reflections. An Amazonian beauty of dark skin and reams of hair sways beneath a pile of pearls cluttering her full bosom entwined in a black bustier. She possesses a glow all her own as she flits across the low lit club and beneath the shimmering chandelier like a butterfly of midnight. She is Moanna, hostess of the evening. Her and her husband, surgical wonder of the medical world, David Luu, have rented out The Griffin for a private party but Luu has left to chase the chains of his duty as doctor, to perform an emergency surgery at St. Vincent’s and Moanna takes the reigns. She welcomes. She socializes. She shimmies her flawless figure with pride in her eyes and a drink in hand. The designated theme is something reminiscent to the mystical days of Moulin Rouge – fishnet stockings and sheer skirts clutter the floor. A table of various masks sits by the entryway of grand, unmarked doors and new arrivals peruse the selection, whispering excitedly as they snap chosen masks about the crown of their skulls, instantaneously calmer beneath the shield.

A bone laden lady with protruding collar bones and pursed lips applies lipstick in the mirrors slated across the walls and the eyes of a young man watching fill with intrigue and seduction. He watches her watch herself. At all corners of the room buzz other couples of the same kind, watching each other watch themselves. A strong anticipation permeates The Griffin. The long legged beauties and suit clad men stand around strangely, awaiting. Awaiting what? This no one knows.

No one knows it until it happens. And it happens when Mickey Rourke arrives. The left wing of the room, separated from the right by plush velvet sofas, fills with bopping blonde heads and hands in ice buckets, eager to slake thirst with vodka and champagne of the finest kind.

“Mickey Rourke’s over there,” says a disembodied voice in the semi darkness and the news is repeated moments later by the DJ’s trembling microphone. The models surround him like a ring of smooth skinned sharks. The Black Eyed Peas arrive. The DJ announces this too. One would think that with the ongoing theme of dull light and masked faces, celebrity identity betrays the party’s intention but, by the newly enthused expressions peeking through the golden eye holes, the true tone of the party reveals itself, embarrassingly unmasked despite the efforts.