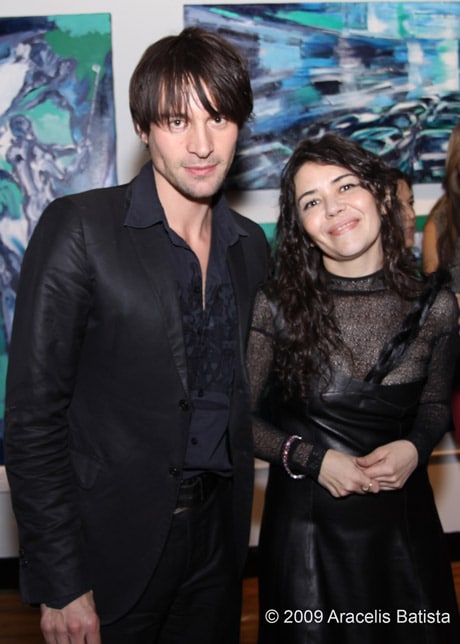 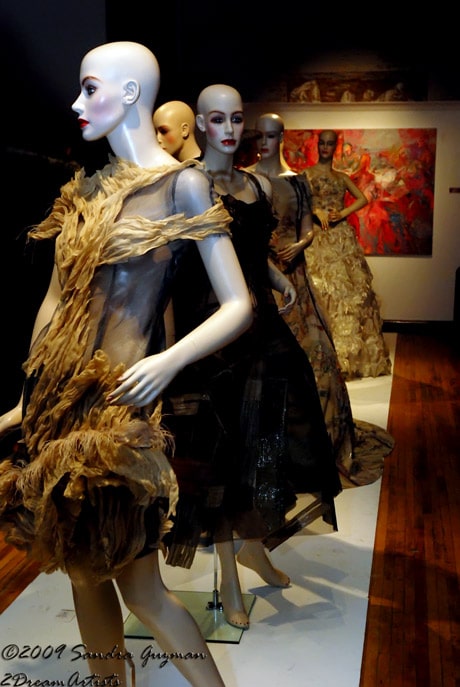 The impulsive exploratory instinct constantly churning within us was turned on high at the L Gallery retrospective of Katya Leonovich’s work. The trick of the Christopher Columbus expedition of last Tuesday, however, was not to find the New World, but to explore the world displayed right in front of our eyes, the magical microcosm that gets trampled on by our subconscious as we reach for the biggest and brightest stars of our universe. But imagining the unimaginable, my friends, will never delight you. Lucky for us, Katya Leonovich gave us the key to her secret wardrobe in which only the tiniest delights were laid out as amuses-bouches for the most delicate palette of the mind.

L gallery provided a cozy, New York-chic shelter from the withering blasts of arctic Snow Queen breath. The auditory sensors were first to perk up in excitement to the faint yet promising beat of DJ Spinosa’s house spins. As the heavy glass doors shyly began to open, the ambient rush of sound smoothly trickled out wrapping its strands of notes around the incoming guests, luring them into Leonovich’s space. But where was the mastermind DJ Spinosa to be found? 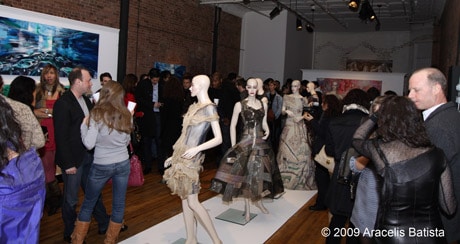 The five baffled bald beauties trapped in their fragile white plastic frames targeted by the spot lights up above were a definite distraction to that question. Each one was seemingly exploring a different side of the room as they walked the white runway strip away from “The Last Supper,” with still, melancholic stares protruding out of their big azure eyes bearing the fate of Christ on their shoulders.

The one nearest to the entrance, and farthest away from the painting, wore a Eve-like sheer costume that seemed to have captured the currents of wind flowing into the gallery in the beige tulle wrapped around her figure. The one closest to the painting was dressed in an indulgent, divine ball gown of cascading silks of sweet sedated colors. From the warm vibrant colors of “The Last Supper” painting to the unforgiving darkness of the front doors, the progression of designs seemed to counter-intuitively shed layers.

If the frozen runway symbolized the internal struggles, the essence of the soul projected from the eyes of these wicked beauties, then the paintings displayed around all three red-brick walls of the gallery symbolized the skin, the external epidermis that exposes the internal to the external. Snipits from The Seven Deadly Sins and the more recent Holland Tunnel series provided a frame of mind for the guests to explore the designs of Leonovich in another dimension.

So, you may be wondering when our delightful little surprises come into play. Well, to understand and value the small intricate details, one must first see the general overview. One could very well have kept dreaming and inventing within the world of Leonovich’s artistic creativity, but another more light-hearted down-to-Earth facet of Katya was also provided. Only those priviledged with very astute and playful eyes, however, were able to see these details that may have seemed mundane in and of themselves, but absolutely riveting in totality.

For those more introspective explorators, the runway was the first delightful territory. At first glimpse, the “War and Peace” dress seems to look more like a canvas of pastel colored green, gray, mauve, teal colors abstractions. When zooming in closer, however, a whole other world is revealed. Miniature plastic soldiers in army formation walked along the trail towards the metal cylinder on tracks, choo-chooing across the spiraling figure of the mannequin in between the painted mountain tops. The allegory of mother peace, and mother war was a gentle reminder that realities should not be ignored even in the presence of lust and luxury.

Those three chit-chatting in their “three graces” formation, closed in amongst themselves, may have missed the details War and Peace, as well as the actual physicality of the mannequins. Although the beauty in the evening silk gown near  “The Last Supper” looked regal, the spotlights were fixated on her intertwined hands, exposing the slovenly applied diva teenager nail polish. A stark, and perhaps daunting contradiction that none-the-less brought a smile to my face. 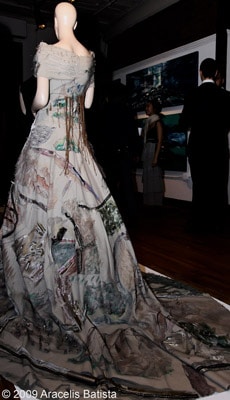 Another little trick hid behind the dividing wall on which “The Last Super” hung near the back of the room. The muse of the mood, DJ Spinosa, stood bobbing to his beats in total concentration in front of his set, twisting, pushing, bopping buttons with quick innate impulses. And although one could watch his dance the whole night, another more silent installation stood beside him in this VIP section. The coat rack to the right held the coats of the guests. The rack to the left could have been mistaken for another one, but Leonovich decided to play a trick on us. Pieces of design from various past collections hung waiting to be purchased, or at least tried on by guests. One smart lady found the rose red haute-couture top made from Italian fabrics, and slipped into it, marveling at the piece from an insider’s perspective.

Although Katya Leonovich knows how to arouse the angels of imagination in us all, she has another side, which can only be understood if we let ourselves delve into a state of exploration. If you understood her game, you must have felt like you did as a child voraciously seeking eggs during Easter simply looking for more even when you know there are none left to be found. In her black leather dress and snazzy black stilletos, Katya Leonovich twirled around the room secretly revealing those intricacies of the night to special guests.