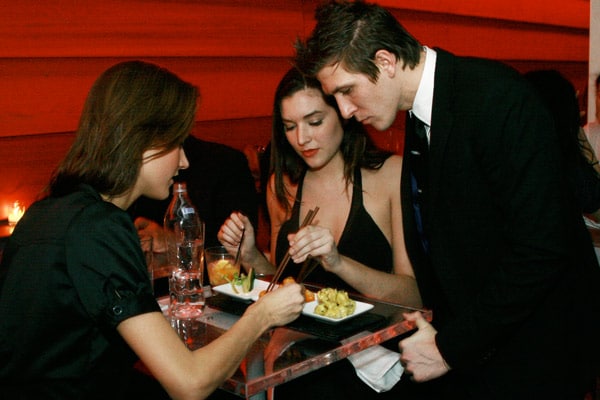 New York’s Wonder Twins, the Koch brothers have activated their powers yet again and have assumed the form of a whale on 88 10th avenue. Swallowing up Gotham’s beautiful girls and wooden boys for a Tuesday night dinner in the belly of the beast. Sushi eating Catholics are saying to themselves, “If only Jonah had it this good.”

Derek and Daniel Koch, of the now famed Saturday Brunch at Merkato 55, are getting an early jump on the week at Morimoto offering a menu adjusted to their own specifications for all of their many friends.  I never met the boys and from the first of many handshakes given and witnessed I couldn’t help but be impressed by the two. Dostoevsky once said, “We sometimes encounter people, even perfect strangers, who begin to interest us at first sight, somehow suddenly, all at once, before a word has been spoken.” And it’s true. What can I say?  They ooze with charm. And who doesn’t like to be oozed every once in a while? 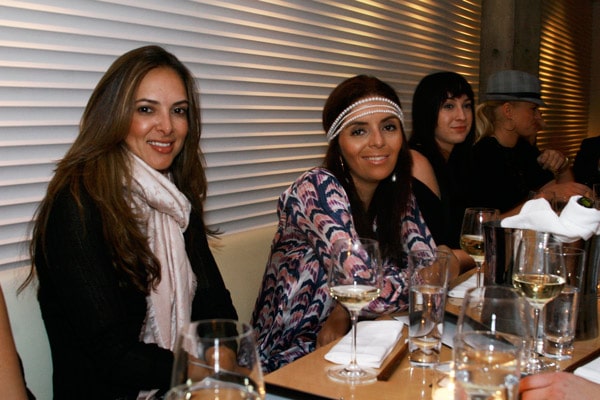 Rarely still for more than two minutes, here one moment, gone the next, interviewing them was like fishing for blue marlin. But I understand, they’re working, and they’re doing a damn good job.  I’m just going to need better bait next time.

From what little words we did have, they stated their passion for food, wine, and taking over venues for rousing shindigs and such. Their goal to acquire their own hotel of decadence that let’s face it, we all want is high for the taking. With their affinity for all that is beautiful this scallywag’s attempts to scrape the surface of two fascinating characters has yet to capture the stain of my ink.  They hand me their cards, thick enough to sail an ocean on, and I join Scallywag’s loveable publicist Sabrina at a table we’re I’m introduced to the Australian designer of Greek descent Anna Giannis and Maurice Dancer the concierge of The Pierre Hotel.

It’s a nice way to kick off your Tuesday night, not too crazy, interesting people to meet and talk to, but we had other places to go.  Once upstairs I thoughtlessly lit a cigarette inside the entrance, and from the great whale’s bowels and white ribbed ceiling, I am sneezed into the street, to catch a taxi, and find the rest of my ragtag crew of idealists.