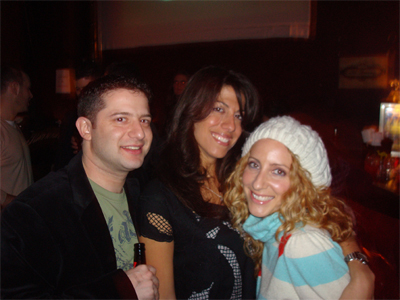 A recent Friday night had me gallivanting at ‘Fontanas’ bar on the lower east side in tribute to our beloved and wondrous friend Brant Kantor, producer at ‘NewBuzztv.com’ Wandering the festivities and the good merriment I posed a series of questions to those who knew Brant (including Brant himself) and those yet to know him. What follows is a delightful repartee that takes in the idea of stardom, high heels, lipstick, indulgences and the one piece of advice we would happily offer our beloved birthday boy.

Melissa; That’s a good question…. (consulting her Heineken in the interim)

Melissa; Brant’s funny? I didn’t know he was funny.

Melissa; They have got to have presence. Aura. (consulting her Heineken again) They enter the room and they’re there. Absolutely.

SCV; What shade of lipstick are you wearing?

Melissa; (takes out a capsule to show me) 912- Hysterics.

SCV; What’s the highest level of heels you would wear?

Melissa; It would depend on the event, time and place.

SCV; What one piece of advice would you give Brant.

SCV; What one thing would you agree you over indulgence in?

Daniel; I don’t know. You tell me. See, look around- every one’s happy.

Daniel; Why not? Happiness is important.

Daniel; I’m sorry my English isn’t so good. To be happy you understand.

SCV; So maybe he’s not funny?

Daniel; No, no, he’s very funny. He reminds me of Joe Pesci, from this film- ‘Goodfellas.’

SCV; Do you ever wear lipstick?

Daniel; I’m sorry, but you would like to use some lipstick?!

Daniel; Charisma. I don’t know it’s something magic. You either have it or you don’t.

SCV; Do you have it?

Daniel; If I try.

SCV; What one thing do you think you over indulgence in?

SCV; Finally what one piece of advice would you give Brant?

Erica; Brant having his birthday party.

SCV; Is it going to your satisfaction?

SCV; Can you tell me a Brant funny moment?

Erica; Are you really writing this down?

SCV; Is it true that you’re from Los Angelos?

Erica; No, but who really is?

Erica; So far no regrets.

SCV; Like in L.A do you wear lipstick and high heels?

Erica; Actually more so in NYC.

SCV; Can you be more specific?

Erica; Lip gloss in L.A and high heels in NYC.

SCV; What is sex appeal?

Erica; I don’t know, something you can’t buy in a department store.

SCV; Are you prone to indulgences?

Erica; Aren’t we all?

SCV; Some more than others. What piece of advice would you offer Brant?

SCV; Have you wished Brant a happy birthday?

Christine; Before I even arrived.

SCV; What would you cast Brant in?

SCV; Could we be privy to the type of lipstick you are wearing tonight?

SCV; And are you wearing high heels or low heels?

SCV; What’s the highest heel you would wear?

SCV; What about high cheek bones?

Christine; If that makes you more confident.

SCV; What one piece of advice would you offer Brant?

Christine; Not to forget my birthday.

SCV; Where are you from?

SCV; Does that mean you can speak French, Italian and German.

SCV; What brings you here?

Franzisca; To meet people, to have fun.

SCV; Can one have fun in Zurich?

Franzisca; It depends who you meet, where you go.

Franzisca; It has its moments.

SCV; Where would you tell Brant to go?

Franzisca; Brant? Who is Brant? Is he someone important?

SCV; We like to think so. It’s his birthday today.

Franziska; Ahh, then he should go to the ‘Box,’ and ‘Beatrice.’ Maybe ‘Café Gitane’ for café and cigarettes tomorrow.

SCV; Is that were you go?

SCV; Do you wear lipstick or high heels?

SCV; Would you call that a fashion statement.

Franziska; Someone who is brilliant. Someone the people like.

Franziska; I think so, (long laugh)……but I think one also needs connections.

SCV; Or at the very least charm and wit to get the connections?

SCV; Finally, if you were inclined to indulgence what would it be?

Franziska; We don’t over indulgence in Switzerland.

SCV; Except in New York.

Franziska; Yes, except in New York.

SCV; What brings you here tonight?

SCV; Can you divulge a Brant funny moment?

Brant; There are so many I don’t know where to begin?

SCV; Is that way your way of being coy?

Brant; That’s a matter of opinion.

SCV; What’s the secret to stardom?

Brant; If I told you it wouldn’t be a secret anymore.

SCV; Are you prone to wearing lipstick or high heels?

Brant; Maybe if I was in front of the camera as opposed to behind it.

Brant; Anything that takes you away from your self.

SCV; Or closer to your self?

Brant; Yes, that too.

SCV; Do you have any indulgences?

Brant; Please don’t get me started.

SCV; And what piece of advice would you offer your guests tonight?

Brant; Look before you leap!

SCV; Finally, how old are you today?

Brant; That’s for you to try to guess and for me to forget.

SCV; In any event, happy birthday and SCV wishes you many more to come.