What if this was a white family? An African-American family have told of their horror after being made to lie face down on the ground at gunpoint, with some family members handcuffed, by Aurora, Colorado police after being suspected of having stolen a vehicle.

The incident took place Sunday morning as Brittney Gilliam drove her daughter and her nieces, ranging through ages of 6-17, through the suburbs while they tried to see if any nail salons were open.

Aurora PD pulls over a family for a suspected stolen vehicle. Police got   the family out of the van at gunpoint and cuffed them face down on the concrete. They check the plates, but it turns out they were looking for a stolen motorcycle, not a van. https://t.co/TjRFKzWXik

‘Why didn’t handle you handle it a different type of way?!’

At some point, Gilliam’s SUV was approached by police at a shopping center, and in footage that was uploaded to Facebook, Gilliam and two members of her family are seen handcuffed on the ground.

Video showed police drawing weapons on Gilliam’s family, as her younger relatives were seen crying and screaming in fear.

Gilliam said her car was stolen back in February only to be found the next day.

Aurora police said confusion may have come from the fact that the vehicle mistakenly stopped was reported stolen earlier this year.

‘There’s no excuse why you didn’t handle it a different type of way,’ Gilliam said about APD. ‘You could have even told them ‘step off to the side let me ask your mom or your auntie a few questions so we can get this cleared up.’ There was different ways to handle it.’

Officers un-handcuffed everyone, apologized and explained the situation. The family asked to make a complaint, so a lieutenant responded to the scene to handle the request, APD said.

Aurora police apologize over ‘mix up’

The family has since filed a complaint and has hired Denver lawyer, David Lane, whose partner, Mari Newman handled the death of black man, Elijah McClain following an encounter with Aurora Police Department as he walked home last August.

The episode led to Chief of Police Vanessa Wilson apologizing in a statement over the ‘mix up.’

‘We have been training our officers that when they contact a suspected stolen car, they should do what is called a high-risk stop,’ she posted.

‘This involves drawing their weapons and ordering all occupants to exit the car and lie prone on the ground.’

‘I have called the family to apologize and to offer any help we can provide, especially for the children who may have been traumatized by yesterday’s events.

‘I have reached out to our victim advocates so we can offer age-appropriate therapy that the city will cover.’

As Wilson mentioned in her statement, Gilliam’s car was flagged by a local license plate scanner that identified her vehicle as stolen. However, the license plate was mistaken for the real stolen vehicle: a motorcycle from Montana.

An internal investigation has now been opened, according to APD.

‘The Aurora Police Department understands that this is concerning and traumatic for those involved and we again offer our apologies,’ APD said in a statement.

In an interview with Good Morning America, Gilliam recalled the emotional distress the incident caused her family, calling the arrest ‘unacceptable.’

‘To hear four kids scream my name like that is the most heartbreaking thing ever,’ she told the outlet.

The incident comes amid nationwide protests following the death of black man, George Floyd at the hands of Minneapolis police along with mounting criticism of the Aurora Police Department’s handling of 23-year-old black man Elijah McClain who died last August who was stopped by cops while walking home.

And then there were these reactions on social media that made this author think. See what you think? 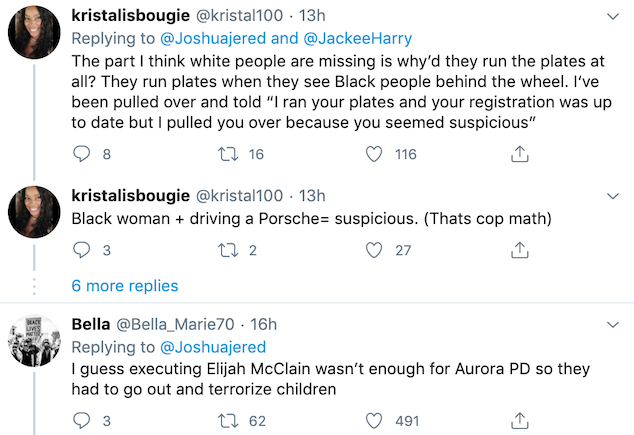