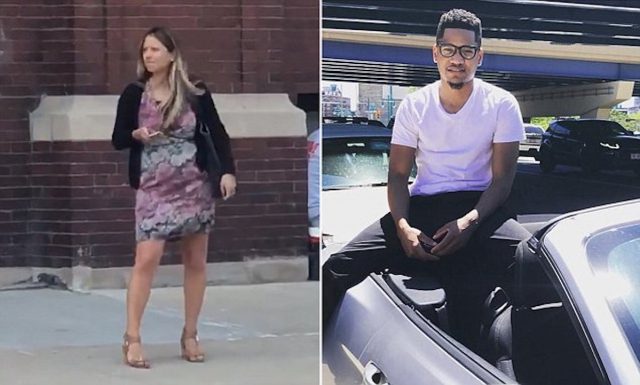 Corvontae Davis racially profiled by RepoRachel Milwaukee white woman: A black man fumbling to get into his own automobile is presumed to be a thief and has police called on him.

A white Milwaukee woman has been accused of racial profiling after calling cops on a black man, ‘breaking into’ his own car.

The incident comes as Corvontae Q. Bizzle Davis a local corrections officer was topping up a parking meter when he was approached by the unidentified woman.

Posted Davis on Facebook along with video of the unfolding incident, ‘So apparently now black people can’t enter their own vehicles.’

‘RepoRachel called the cops on me today here in the historic word of Milwaukee Wisconsin as she believed I was breaking into my own car.

‘When I went back to retrieve change to put into the parking meter.’

Corvontae Davis Milwaukee car owner: Profiled for being a black man trying to enter flashy car (that blacks are presumed not to be able to afford).

The Oak Creek resident said he struggled briefly to open the doors of his 2016 Ford Mustang with his keyless entry.

So he attempted to enter from both sides of the car before he eventually was able to enter.

But he says that rather than ask what was wrong, the woman crossed to the other side of the street before calling police.

‘I was getting ready to put money in a meter or whatever, and she has nothing else better to do and asked me if I was breaking into my car,’ Davis said on video.

‘I work for the State of Wisconsin as an officer at a local prison and to be accused of such behavior, it’s mind-boggling,’ he said.

Davis said he decided to wait until the police arrived.

‘She left me out there to explain myself and the situation and what was going on.’

Adding, ‘Stereotyping, racial profiling. Maybe she thought the vehicle didn’t belong to me, but that’s why you ask questions. You don’t jump to conclusions.’

Davis said he was quickly able to establish he was the owner of the car.

He also said the police apologized for the woman’s call.

Davis said that he is hoping to identify the woman, while stressing all he wants is an apology.

‘MPD did get involve but handled it appropriately and let me enjoy my day,’ he said.

This incident is just the latest in a series of white people calling cops on people of color for seemingly living their day to day lives.

The calls to police betray underlying mistrust of African Americans and minorities and the unspoken reality that in America, much of violent street crime (unlike white collar finance crime) is perpetrated by minorities and that the culture at large and media reporting biasing perceptions.

The calls to police also hint at the reality that America remains a highly polarized society of extreme haves and have nots- often demarcated by race, status and professional/executive class.

Nevertheless the calls also highlight unrelenting bias and prejudice towards African Americans often based on the color of their skin and the loaded biased perceptions against such individuals. Black individuals who society has taught them are likely perpetrators who need to be reprimanded by the superior white individual….