Gary Welsh blogger dead: Did a prominent Indianapolis political blogger meet foul play? Or was his death the result of suicide triggered by depression?

Gary Welsh a prominent Indianapolis blogger has died in what some regard under mysterious circumstances, as police now investigate whether the political blogger killed himself in a murder suicide?

According to a report via the Indy Star, the 53 year old blogger and practicing attorney penned the widely followed conservative blog, Advance Indiana which Gary Welsh launched over a decade ago.

Welsh’s death according to the Indianapolis Metropolitan Police Department’s incident told of officers being dispatched to the Lockerbie Glove Factory Lofts, 430 N. Park Ave., before 8 a.m. Sunday after receiving a report of a person found shot in the stairwell of the building. The witnesses who called 911 reported that a gun was next to the body.

IMPD Capt. Richard Riddle responding to the death told an autopsy was likely to be conducted Monday. Adding that the Marion County Coroner’s Office would determine the official cause of death.

Welsh’s death comes in lieu of the blogger being known for ‘hard-hitting‘ blog posts that critically assuaged both Democrats and Republicans.

Of disconcert was a passage in which the blogger wrote: ‘If I’m not around to see the vote results, my prediction is that Trump wins Indiana with just shy of 50% of the vote, but he will carry every single congressional district and sweep the delegates—assuming the party-chosen delegates honor their rules-bound commitment to support the winner on the first ballot.’

The post had led to one commentator,Mary Catherine Barton remarking on the blog: ‘Btw, Gary, should we read any foreboding in your words about ‘if you are around for the election results.’ Take care of yourself, please.’

Jim Klimek, an attorney and friend who worked across the hall from Welsh in the Chamber of Commerce Building on Meridian Street told via Indiana Business Journal that Welsh had been depressed lately, in part because the blog was extremely time consuming but generated little revenue.

One blog post posited that Welsh was unafraid of unmasking corruption, adding the caveat, that ‘many of his friends had suggested that he be careful.’ 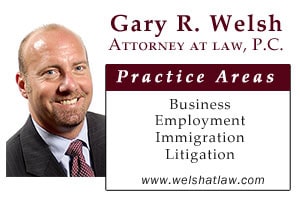 Since Gary Welsh’s suicide purported death, commentators on the web have debated whether a hit could have been taken out, or whether the blogger had suffered mental illness along with the woes of being broke while tending to a demanding task of blogging.

Below are a sampling of reactions that made me wonder, see what you think?

Gee, yes because he was so important someone would want to kill him–don’t be silly. He lived in Indianapolis, not the 18th century French court. I know political intrigue makes for a good story, but real life is much less dramatic.

Unfortunately, depression is a serious health issue that does not get the attention it should. His last post seemed to indicate he was contemplating not being here much longer.

Rest in peace, Gary. While I didn’t always agree with your positions, I always admired your courage posting articles regularly airing dirty political laundry and asking the tough questions the Star, IBJ, and local TV stations typically would not.

This may get taken the wrong way, but even Gary would see this as his perfect death – just enough murkyness that those who knew and followed him will always have a path to an alternate explanation for what happened.