Video footage has emerged capturing an elephant trainer abusing an elephant at a Thai park, on the resort island of Koh Samui a week before the same animal would come to maul British tourist, Gareth Crowe as the doomed man rode the abused animal.

The film which has since surfaced (see below) shows a guide spearing the docile animal with a hooked stick. As the startled elephant backs away, the handler then takes to sharply stabbing it in the face.

The video was filmed at the same park on the island of Ko Samui where the hapless tourist was stabbed in the chest while riding the elephant who tossed him to the ground in anger.

According to a report via the dailymail, video footage was captured by tourist Kelly Ackerman, 24 on January 25 as she happened to walk past the used by Island Safari Tour Co.

Incensed the woman posted the footage to the company’s Facebook page, where she wrote of her concerns about the treatment of the elephants.

Shortly after the video was posted, the post was deleted.

Told the civil servant from Chichester, West Sussex, said: ‘I think that that is why the animals get aggressive, because of the way they are being treated.

‘When we were walking back I saw the baby elephants being bathed, and I noticed the guy was being quite aggressive, shouting at the elephant, so I started to film.

‘I just didn’t like the look of what he was doing. He had a spear with a bullhook on the end and it was sharp.

‘He started all of a sudden spearing the elephant with the stick.

‘The elephant wasn’t doing anything. He just started spearing him for no reason. It was quite upsetting.’

She added: ‘The elephants were also kept in terrible conditions, in really tiny enclosures. Knowing what has happened now, it’s even more shocking.

‘Hopefully this can raise awareness of how they treat animals there and for people to stop paying these places to ride them.’

Horror would unfold a mere week later when Gareth Crowe, 36, was trekking on the elephant with his 16-year-old step-daughter Eilidh Hughes when the 13 year old elephant threw the pair off its back, trampled over the man and goring him with its tusks.

The incident led to the hapless tourist’s immediate death while the teen daughter was rushed to hospital with minor injuries.

Witnesses said the incident arose after the elephant’s handler climbed down to take photos of the tourists, while Gareth Crowe had been teasing the animal with a banana prior to the attack.

In the days after the attack, the man’s daughter has spoken out, insisting her step-father did not do anything to antagonize the elephant.

Told the teen girl via a local Thai news outlet: ‘He was not teasing the elephant as I was his 16 year old daughter who is lying in hospital and I was on it.

‘I know everything that happened. This is a serious situation!!!’

The incident came whilst Gareth Crowe had come to the holiday island with his partner Catherine Hughes, 42, mother to Eilidh and her brother Mark, who decided not to go on the trek.

Witnesses said the elephant – known as Golf – had appeared upset prior to the attack and refused to follow the instructions of the mahout who hit him several times with a hook.

After the mahout climbed down from the animal, the elephant began its rampage, also spearing the local guide in the process, before running into the forest.

According to the Bangkok Post, Wongsiri Promchana, the Surat Thani governor, said he had been told that Golf had shown signs of similar behavior two earlier, with the hot weather a possible cause of the rampage.

Animal charities have been calling on tourists to think carefully before they take part in wild animal experiences. World Animal Protection said thoughts were with the family of the man who died but added that the incident was a ‘stark reminder’ that elephants are not meant to be ridden.

Told a spokeswoman: ‘Elephants are cruelly abused to tame them enough so they give rides and perform in shows.

‘Most tourists don’t know about these abuses, or the potential danger they put themselves in. If you can ride it, hug it or have a selfie with a wild animal, then the chances are it is cruel and the animal is suffering.’

Organizers have since told that the elephant, dubbed Rambo will take a 15-day break from work and then be moved to another branch of the trekking company in either Krabi or Phang Nga. 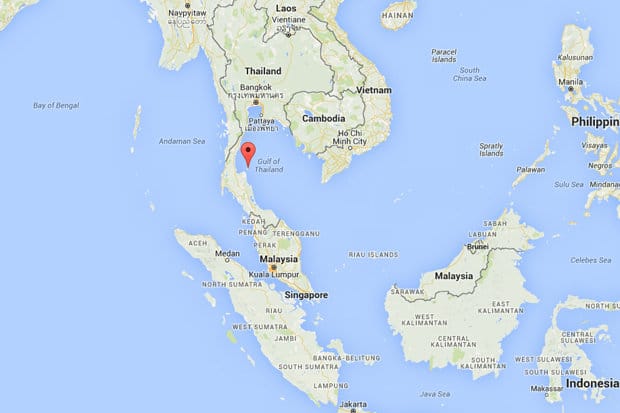 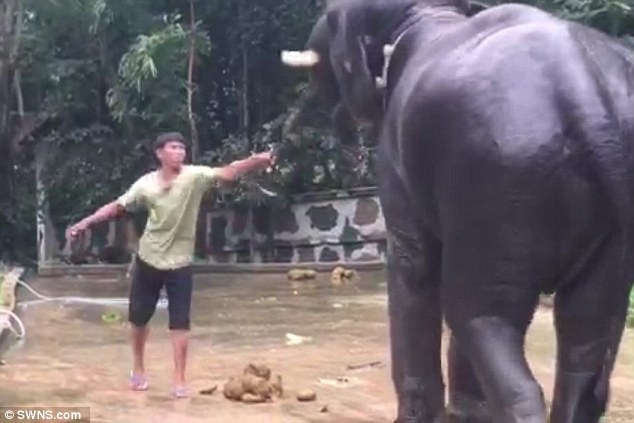