A Gofundme campaign set up by Tennessee woman Cinnamon Nicole has been shut down by site administrators after the woman sought to recoup her life savings of $800 after failing to win Powerball.

The account’s closure comes despite the woman raising more than $800 in seven hours time after her and her family told of spending a fortune on lottery tickets last week.

What fortune was spend wasn’t necessarily disclosed. A previous post on Nicole’s Facebook page said she won $4 from her tickets.

At the time, punters stood a 1 in 292.2 million chance of actually winning the jackpot of $1.58 billion.

Wrote the woman either in earnest or as a joke (the jury remains divided) on a page, titled, Powerball Reimbursement Fund: ‘Please help me and my family as we have exhausted [sic] all of our funds. We spent all of our money on lottery tickets (expecting to win the 1.5 billion) and are now in dire need of cash,’

‘…I’m certain that we will be able to pick ourselves up from the trenches of this lost [sic] and spend another fortune trying to hit it big again!”

“PLEASE, won’t you help a family in need. DONATE NOW,”

Responding to the resulting media hubris, Cinnamon Nicole thanked her supporters on Facebook Friday and suggested that it was all just a joke.

“I Thank all of you who actually stuck by me and stood up for me, I appreciate it. People are so quick to judge without knowing or even considering anything other than their point of view,” she wrote. “But this ain’t no serious post…. Continue to bash, scorn/ scandalize my name.”

GoFundMe confirmed to CNet the page was removed, stating: ‘The campaign in question was removed for a violation of GoFundMe’s Terms & Conditions.’

The company added that all of the funds raised have been returned to the donors. 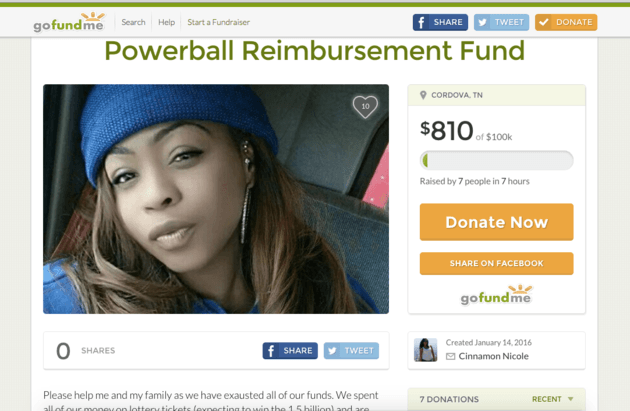