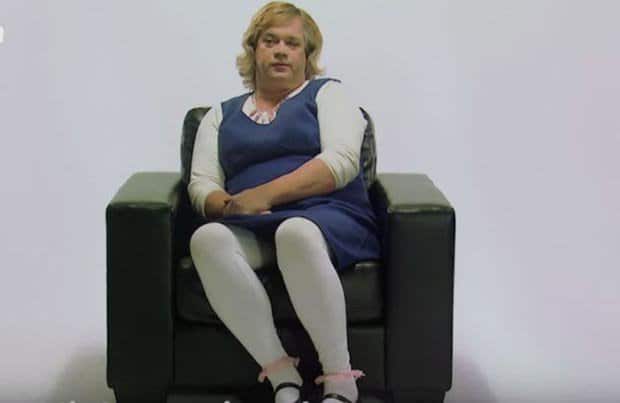 Canada’s Stefonknee Wolschtt has caused disconcert with the revelation that the former married Toronto father left his wife and seven kids in a bid to fulfill ‘her’ true identity: that of a six year old girl.

Speaking to The Daily Xtra in collaboration with The Transgender Project, Stefonknee, now 52,  says she realized she was transgender – rather that simply a cross-dresser – at age 46, and split from her wife, Maria, after she told her husband to ‘stop being trans or leave’.

Now living with friends whom Stefonknee calls her ‘adoptive mommy and daddy’,’ Stefonknee tells days are spent dressing in children’s clothing along with playing and coloring with her adoptive parents’ grandchildren.

Stefonknee says her ‘adoptive’ family, which consists of an older couple and their children and young grandchildren, are completely accepting of her identifying as a little girl.

Explains the now six year old girl: ‘I’m living as a six-year-old girl because it’s something I could never do when I was in grade school,’

‘But I’ve moved forward now and I’ve gone back to being a child. I don’t want to be an adult right now.’

Further adding: ‘I have a mommy and a daddy – an adopted mommy and daddy – who are totally comfortable with me being a little girl. And their children and their grandchildren are totally supportive.’

From there viewers are told that Stefonknee previously lived as an eight-year-old girl, until the couple’s granddaughter asked her to be the younger sister instead. Indeed.

In the winter, Stefonknee earns money by plowing snow, and when she’s at home with her adoptive family, they color and ‘do kid’s stuff’.

‘It’s called play therapy. No medication, no suicide thoughts. And I just get to play,‘ she shares.

Addressing his wife’s ultimatum to ‘stop being trans or leave’, Stefonknee told: ‘To me, “stop being trans” isn’t something I could do. It would be like telling me to stop being six-foot-two or leave.’

Stefonknee, who previously went by the name Paul, worked as a mechanic and was a dedicated member of the Catholic church, says she was trans before she got married to Maria after high school, but wasn’t educated about what that meant, and was terrified of being different.

In a previous episode of The Transgender Project, Stefonknee said she first realized she was different from other boys as early as age six, because she was always jealous of the girls at school who got to wear new dresses on picture day.

After dating Maria in high school, Stefonknee tells how they later married, explaining how Maria was surprised by Paul’s love of women’s clothing, and inititally supportive, even buying Paul an outfit.

‘The next day, she bought me a black pleated skirt, a white blouse, and a grey camisole… so then I had an ally.’

But while Maria was supportive of her husband’s cross-dressing, she did not accept him as transgender.

At age 44, after attending some transgender workshops, Paul sat their their seven kids down and told them he was a woman.

He asked the kids to write him letters about their feelings, and read a letter from his son Peter aloud on The Transgender Project.

‘Dear Dad, I feel it is very imbarassing [sic] to see you walk around like that. But if you rilly [sic] want it, it will be OK with me. Love, Peter,’ read Stefonknee in the clip.

In letters from his other kids, they expressed that they were ‘grossed out’ about seeing him wearing dresses, and that he acted like their mother rather than their father.

Reiterated Stefonknee: ‘I was a trans parent for 23 years. It scared me, because I didn’t know how to not be trans.’ 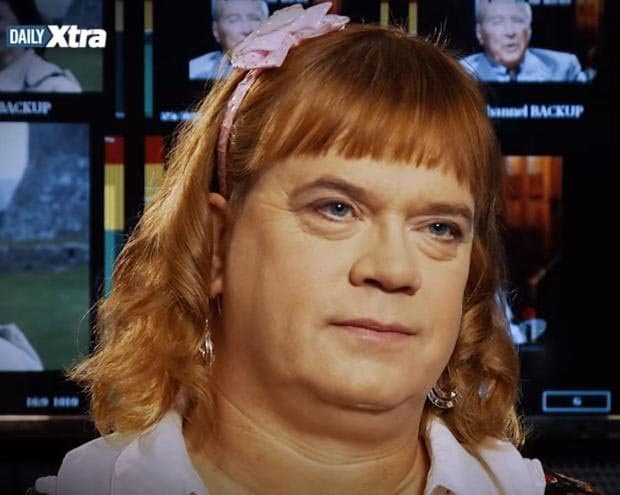 With Paul’s wife refusing to accept the real her, Stefonknee left to live as woman and began hormone replacement therapy in 2009.

Months later, she became suicidal and was hospitalized for a month after taking part in Toronto’s first transgender rally.

She lost her job as a mechanic due to the fact that she was transgender, and was forced to sleep in a homeless shelter for months.

‘I basically just lost all my customers. I [was] sleeping in a bed in a homeless shelter,‘ she revealed, adding that coming out as transgender was ‘the hardest thing I’ve ever had to do.’

In 2012, her daughter Amanda invited her to her wedding, but only on the condition that she dress like a man and sit in the back of the church, not addressing any members of the family.

That day, she attempted suicide for the second time. 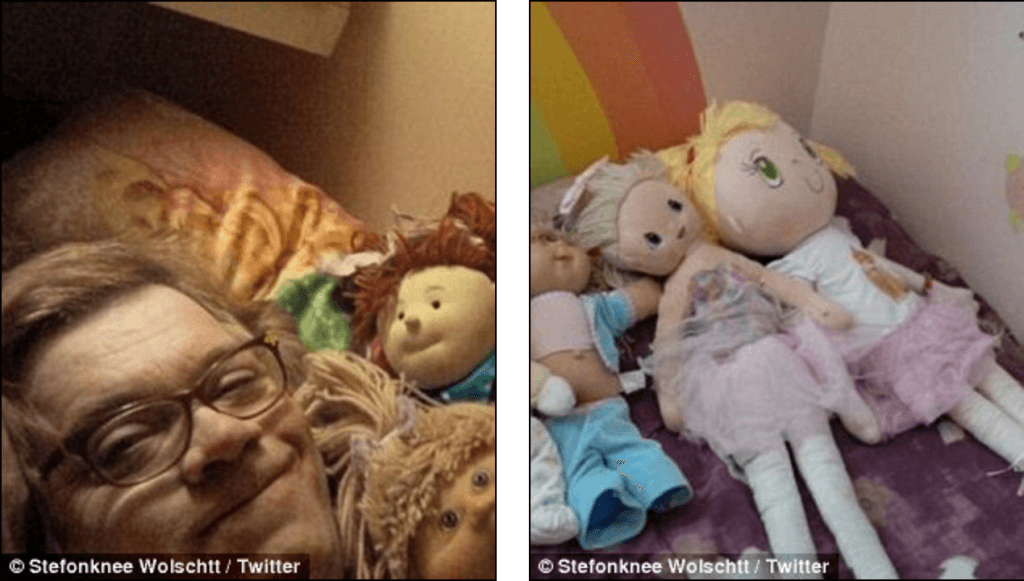 Stefonknee has since found acceptance at Metropolitan Community Church of Toronto, where much of the congregation is made up of LGBT members who have formed a special support group just for her.

Asked why she wanted to share her story, Stefonknee tells: ‘I paid a pretty heavy price for transitioning. I’ve already lost everything, and everything has happened. I’m gonna be me, and I’m gonna show other people that it’s OK to be feminine for a guy.’

She went on to reveal that a lot of unexpected people have come out to her as transgender since then, saying: ‘When you see a guy that’s 300 pounds with a goatee that pulls in on a Harley and is going through my closet and saying: “Can I wear this dress? Can I kiss you while I’m wearing the dress?” You don’t expect it.’

She also spends much of her time raising awareness for the transgender community and attending rallies.

‘It’s a fresh start,’ says Stefonknee, adding: ‘We have a quasi-family that we’re creating. And I’m allowed to be exactly who I am.’

And then there were these following comments below on the web that made me wonder. See what you think?

This guy represent a HUGE part of what is wrong with our society. He clearly has severe mental issues which are not being helped by the “if it feels good, do it” crowd’s approach to problems.
Look at his twitter page; it’s full of other knuckleheads affirming his insanity.
He is a 52 year old man, not a 6 year old girl, no matter how pretty he thinks he looks in a dress and maryjane’s.

There’s something beyond disturbing about an 40 something year old man who pretends to be a 6 year old girl!!

Feel sorry for his kids, normally I’d say if no ones being hurt what ever, but he’s making victims out of his kids just because he wants to be a little girl.. Selfish selfish man. 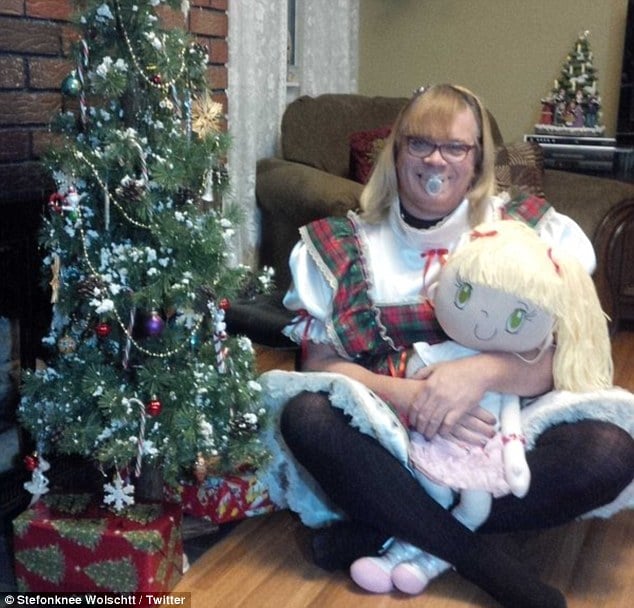 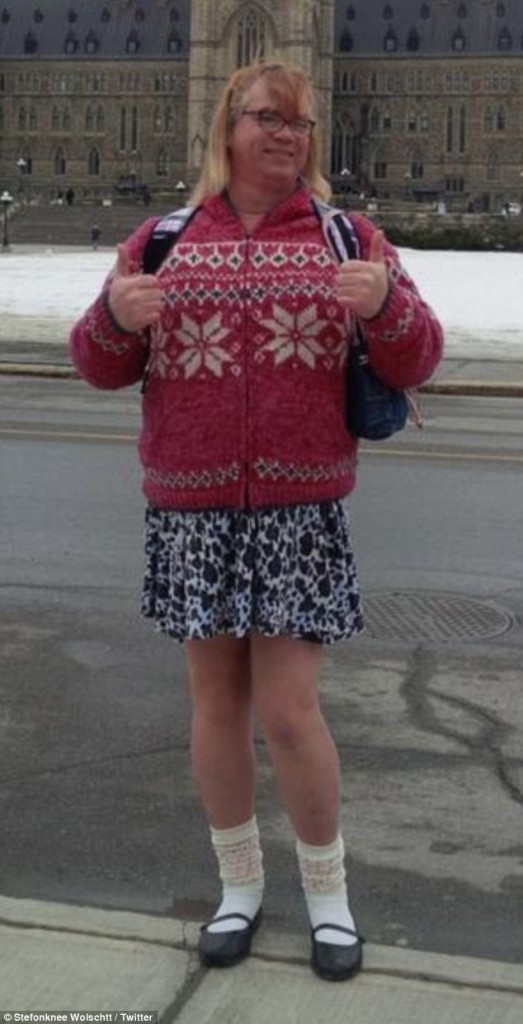