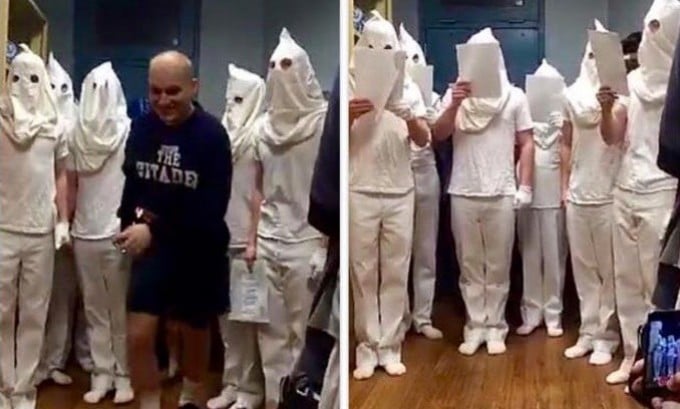 The Citadel military college in South Carolina has begun suspension proceedings for several students after pictures surfaced on social media showing them wearing white pillowcases as hoods in a manner similar to white supremacy group, the Ku Klux Klan.

Responding to the fiasco, the president of The Citadel military college and Lt. General John Rosa explained that the photos of Citadel cadets simply showed the young men ‘singing Christmas carols as part of a ‘Ghosts of Christmas Past’ skit.”

According to a report via WCIV, pictures of the cadets first appeared on Snapchat, before a woman posted the images to Facebook. She was then reportedly ‘threatened, harassed and offered money from numerous Citadel Cadets to take it offline in order to not ‘ruin their lives.”

According to her Facebook post, the woman posted discovering the images after she was approached by a guy she did not know on several social media platforms who reportedly told her ‘I always wanted a black girl.’

She then checked the man’s Snapchat story, which included photos and videos of Citadel cadets wearing white hoods and laughing.

‘I screenshotted and decided to share because I was so offended,‘ the woman wrote on Facebook. ‘Was this their idea of some kind of joke?’ 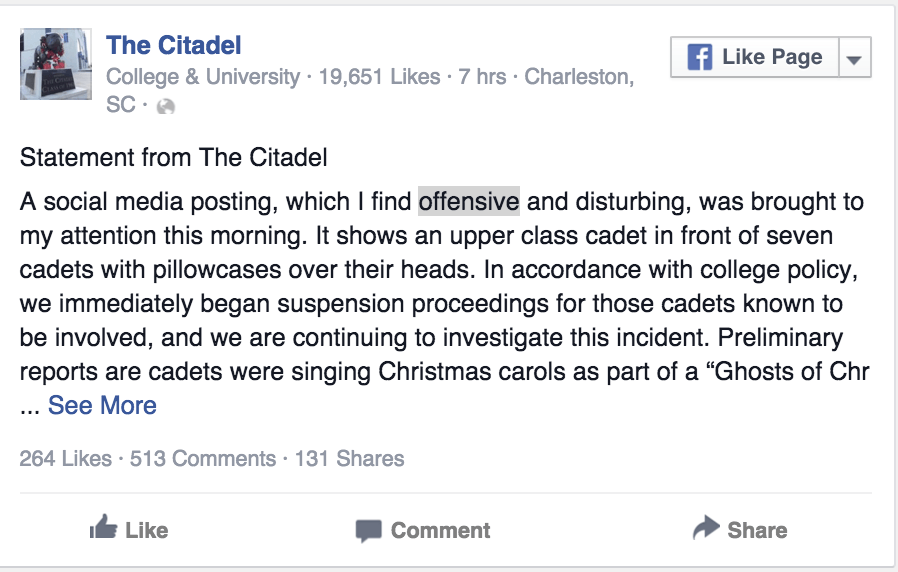 School administrators and officers are currently looking into the situation, though reports suggest the skit and hoods are part of an underclassmen hazing ritual. The Citadel has also acknowledged the incident on Facebook.

‘These images are not consistent with our core values of honor, duty and respect,’ said Rosa. ‘We will provide more information upon completion of the investigation.’

Adding: ‘This picture is a disgrace and a slap in the face’.

‘There was a certain degree of obsession for the KKK’

The Citadel was founded in 1842 as a military college and arsenal established by Charleston, South Carolina officials to protect white residents from the city’s majority black population over fears of a slave revolt. On June 17, nine people at the church were murdered by a white gunman, 21-year-old Dylann Storm Roof.

The clip from which the images initiated comes as KKK membership in the state is said to be surging.

Suspensions have already been doled out to at least seven students, with more expected. So much for glossing over political correctness, right …? 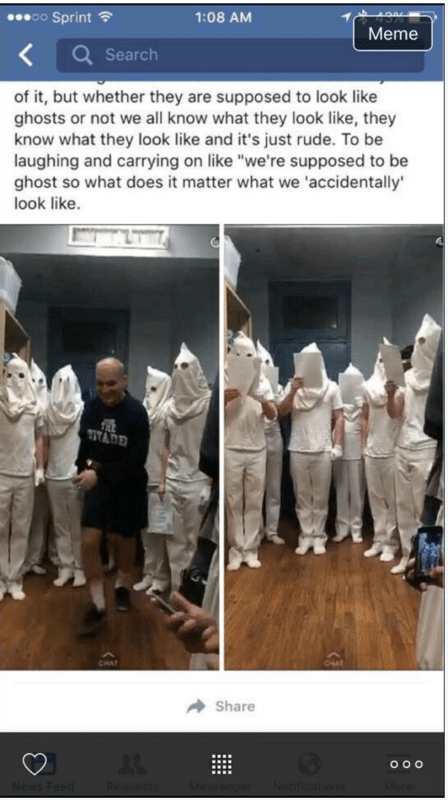