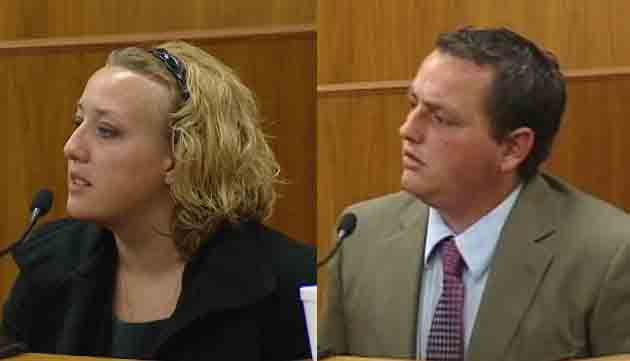 Dale and Shannon Hickman, an Oregon couple who prayed and rubbed olive on their dying son following a home birth rather than call 911 will continue to serve six years in prison each after a judge upheld their manslaughter conviction.

The faith heal based parents were both convicted in 2011 of second-degree manslaughter for the death of their son, David, who died nine hours after his home birth in 2009.

David was born two months early at his grandmother’s home with undeveloped lungs, and died after having trouble breathing and turning blue.

The Hickman’s – members of a controversial faith-healing church in Oregon, The Followers of Christ Church had appealed their conviction, on the grounds that the prosecution had the burden to prove the couple knew their religious beliefs would cause the death of their child, The New York Daily News reported.

But the plea was rejected by the Oregon Supreme Court last week.

In making their decision the court reiterated that the parents could have done more to try and save their son.

During the 2011 trial, a doctor had testified that David would have had a ’99 percent chance’ of surviving had the couple called 911.

The baby officially died of staphylococcus pneumonia, which could have been treated.

‘As the evidence unfolded and the witnesses testified, it became evident to me and certainly to the jury … that this death just simply did not need to occur,’ Judge Robert Herndon said.

Prosecutors explained during the trial that David was born with a bacterial infection and underdeveloped lungs.

In his defense, the father told he didn’t call 911 because he was praying. The couple never considered taking the baby to the hospital, prosecutors said.

Shannon Hickman said church rules required her to defer to her husband.

‘I think it’s God’s will whatever happens,’ she testified.

Defence lawyer, Mark Cogain told the boy died quickly and there was no evidence that medical care would have saved him.

The Followers of Christ Church has a history of rejecting medical care for children and relying on as prayer and anointing the sick with oils.

Five other church members have been convicted in Clackamas County for crimes related to the rejection of medical care for their children.

But many feared that, because of a religious exemption in state law at time of the crime, they might have received just 18 months in prison and a $250,000 fine.

In response to deaths among Followers of Christ members, state lawmakers removed the religious defences from criminal laws this year.

Those exemptions had made it tougher to convict parents shunning a child’s medical care for religious reasons instead of neglect.

The change will allow prosecutors to seek stiffer manslaughter or murder charges in faith-healing cases.

On Monday, Prosecutor Mike Regan said a message needed to be sent to the church that child abuse for any motive is still child abuse.

He said: ‘These generally are good, decent, law-abiding folks, except in this one narrow area of their lives. One (area) where they have told us stubbornly – and arrogantly, if I may – that ‘We are not going to change.’

‘The law of civil society demands that they change. It demands that we sent a message to all of them that whether you believe this or not in Oregon, you cannot act upon that belief.’

This isn’t a matter of faith. If it were then they would have called 911 and had faith that the Lord would provide healing to their child through the hands of those who have been trained to heal. No, this was a matter of pride and extreme stupidity quite frankly.

‘m as liberal as anyone but to give them life would be even crazier than trying to heal the baby with oil. The last thing they wanted was for the babe to die, are probably going to feel terrible for the rest of their lives, I think they’ve suffered enough.

God said to trust him, but he gave you a brain for a reason. Fools.