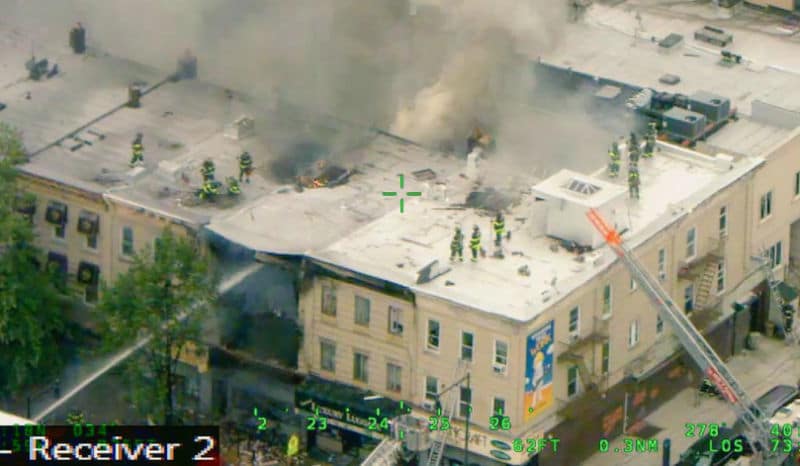 Authorities have told the removal of a high end stove likely led to a massive gas explosion that tore the front of Borough Brooklyn building, leaving a 60 year old female tenant who had just moved into the building literally days before dead early Saturday afternoon.

FDNY Fire Commissioner Daniel Nigro said the gas leak that set off the deadly blast may have been caused when second-floor tenants of the 13th Ave. building near 42nd St. recently removed a pricey stove.

The new tenant died in the blast as plume of smoke descended on the street. At the time she was in the building stairwell when the blast erupted. As of Saturday evening, the woman’s identity has yet to be revealed police said.

Smoke eaters entering the demolished shell — which once held the appliance store “Pots N Watts” — and found the dead woman inside. It was later disclosed the woman’s body had been burned almost beyond recognition.

Firefighters laid a sheet over the woman before continuing their search for survivors, witnesses said.

Along with the new tenant, five other individuals inside the building were injured as a consequence of debris and smoke inhalation.

Also injured were three victims, including a 33-year-old man and his 10-year-old son after being hit by debris as they walked along the front of the erupted building in the predominantly Orthodox Jewish and Latin enclave.

All three were taken to Maimonides Hospital with minor injuries.

Told Nigro during a Saturday afternoon press conference: ‘They were moving out of the apartment and wanted to take that stove with them,’

‘(Taking) a stove with you entails disconnecting the gas line which leads us preliminarily to look in that direction for the cause of this explosion.’

In a statement, Governor Andrew Cuomo said the State Department of Public Service will conduct an investigation into the cause of the explosion adding.

Reiterated Cuomo: ‘Earlier today, an explosion took place at a building in the Borough Park neighborhood in Brooklyn.

‘This explosion is the latest in a disturbing trend of incidents that occurred in Harlem and the East Village.

‘In light of this, I am directing the State Department of Public Service to undertake an investigation into the cause of this incident.’

A report via the nytimes tells the building, was built in 1930, had a storefront on the ground floor and apartments on the upper floors. The report notes the building had not been cited for code violations since 1997, according to records available online.

Records show that the building’s owner installed a gas-fired boiler in 1993 to replace an oil-fired boiler. An inspection of the gas boiler by an insurance agent in July 2014 found no defects, according to the most recent records available on the Buildings Department’s website.

The times also describes how a construction worker,  M. Hasan, 30, living across the street from where the blast occurred recalling talking with his grandmother in his second-floor apartment when he heard a loud explosion.

Mr. Hasan said he ran downstairs and saw huge flames and a man lying on the ground. The man was taken away by an ambulance, he said.

‘I never saw a fire like that in my life,’ he said.

Salvador Torre, who lives next door to the doomed building reports the nydailynews had just gotten into his friend’s car when he heard the blast.

‘We got out and saw smoke and glass everywhere,’ said the man. ‘I thought about my family. The flames were huge and I was scared that the building could collapse.’

His building wasn’t damaged but the one next door was consumed in flames, he recalled.

Panicking, he ran up to his third floor apartment and told his wife, two daughters and son that everyone had to leave.

‘They left with nothing … without shoes,’ he said. ‘I was afraid something else would explode. Thank God we’re OK.’

‘It was dark … like night,’ recalled 11-year-old Roza Arafa Chowdhury moments after the blast on the 13th Ave. shopping corridor near 42nd St. in Borough Park.

‘A guy was trying to take his father (away from the scene) but the fire was too big and they were burned.’

Five out of the more than 200 firefighters who responded to the scene also suffered minor injuries.

By Saturday evening, the fire was mostly out, but the building remained structurally unsound according to authorities.

Residents have told of being left shell-shocked.

Commented an individual via gawker: My guess is that someone left a gas stove or oven on for Shabbos and then the flame went out. Especially the oven they might not have noticed the flame went out, build-up of gas may have caused residents to pass out, and then boom, even a slight static electricity spark to make the apartment explode, which wouldn’t surprise me at all with the amount of wool the Bobovers tend to wear, and it is a predominantly Bobover neighborhood.

Sad. Be safe for Shabbos, folks, and get a non-flammable auto-off hotplate or crockpot instead of leaving your gas appliances on for 24 hours.

Brooklyn I’m on the scene of a Fatal 3rd Alarm Fire & Gas Explosion with a collapse on 13th Ave & 42nd St pic.twitter.com/MB8LKJDacp