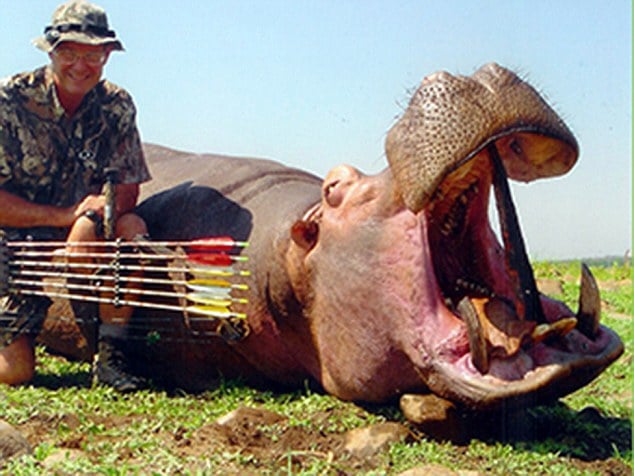 Dr Jan Seski, a second American medical practitioner has been named in recent days as been sought by Zimbabwe authorities in relation to the ongoing saga of illegal game hunting, poaching of lions.

The release of the Pennsylvania based doctor’s name comes less than a week after authorities identified Dr Walter James Palmer as the poacher who bribed hunting guides to perpetrate an illegal hunt off the grounds of Hwange National Park.

In their latest press release, Zimbabwe authorities allege that the 68 year old Director of Gynecologic Oncology at Pittsburg’s Allegheny General Hospital illegally hunted down an elephant in April along with his guides who have since been arrested.

It is understood the gynecologist also operated a private practice at Jan Seski M.D. and Associates.

According to a statement released to CBS a Zimbabwean landowner named Headman Sibanda was arrested in the case and is assisting police with their investigation. He named Seski as being involved in the hunt.

The outing of the doctor’s identity like Walter Palmer’s before him has led to the emergence of garish images of Sask’s hunting kills, where the gynecologist brazenly gloats over the bodies of dead game animals, including, elephants, hippos, zebras, ostriches, impala and water buffalo. 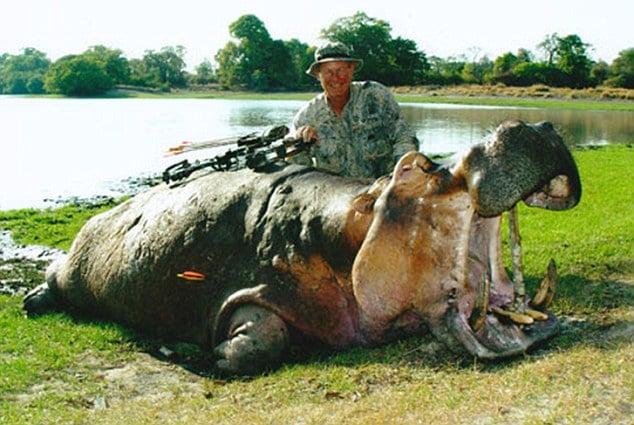 The images come via the Alaska Bow Hunting society which Seski is a member of which shows members posing with elephants, hippos and other animals they’ve killed.

As members, hunters use the more arcane process of hunting with bow and arrow as opposed to rifle, often leaving for chance that animals may be critically injured but not immediately felled and thus enduring agonizing pain before finally succumbing, sometimes days later.

In one image showing the gynecologist proudly standing over the body of a felled African elephant, a description on the hunting website describes as following: ‘This Zimbabwe elephant is the sixth African elephant shot by Dr. Jan Seski. For this hunt Jan used our custom-built GrizzlyStick Momentum UFOC 175 arrows cut to 29 inches and fletched with 4-inch DuraVanes to accommodate his finger-shooting style,’

Adding: ‘The arrow was shot quartering into the elephant, penetrated a rib and one lung, lacerated the heart and liver, and was recovered in the gut. The elephant went a short distance and died. With results like this, no wonder Jan is a firm supporter of our Ultra-Magnum Arrow System,’ 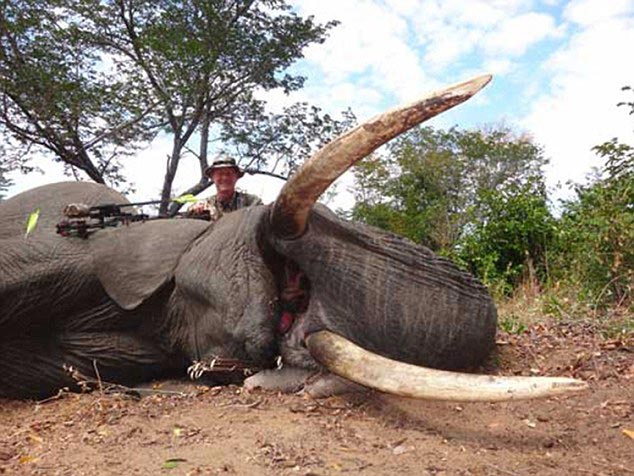 In another photo of Seski with another dead elephant, the description beneath the photo makes mention of the extremely valuable tusk

Says the website: ‘Really nice bull elephant taken by Dr. Jan Seski with one Ashby tipped arrow. The bull was quarteing away at 20-yards. The arrow struck high in the crease, traveled between ribs on the near side, cut completely through the top of the heart, then kept going out the other side, once again, between ribs. The ivroy was 50+# per tusk. Congratulations to Dr. Jan Seski on another fine elephant with the bow and arrow,’

‘Dr. Jan Seski took this elephant bull with 45 pound ivory with one Ashby tipped arrow. He booked his hunt through Neil Summers of Bowhunting Safari Consultants. Look at the penetration Dr. Seski got with the Ashby broadhead even after going through the elephant’s rib! Congratulations Dr. Seski!!,’

‘Take a look at the penetration Jan Seski got on this hippo with a GrizzlyStik Ashby broadhead. Jan used an 85# Mathews Monster with a heavy arrow that drove the Ashby broadhead into the far rib. Congratulations to Jan on a fine hippo taken with one shot,’ says the description beneath the photograph. 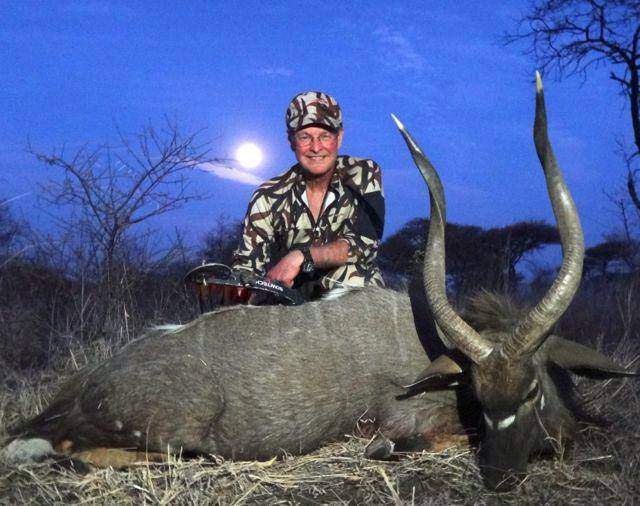 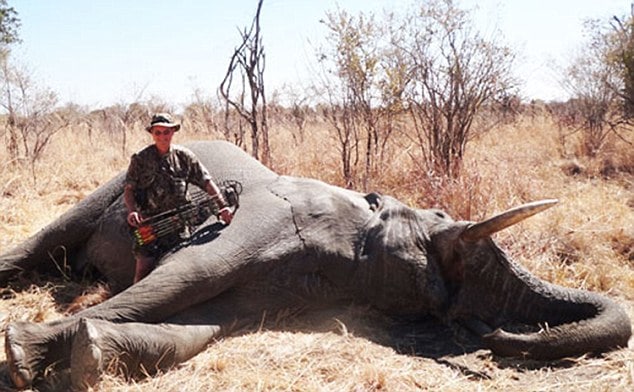 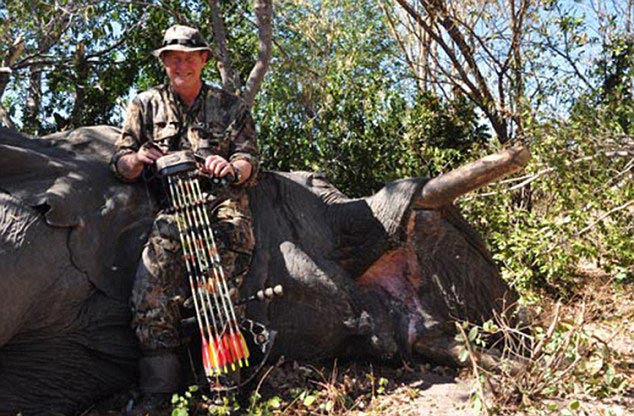 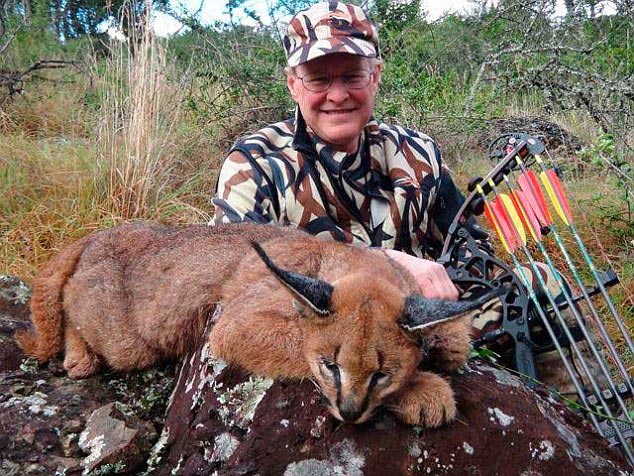 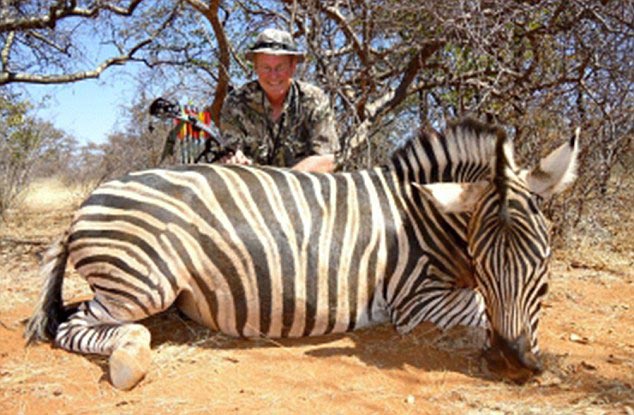