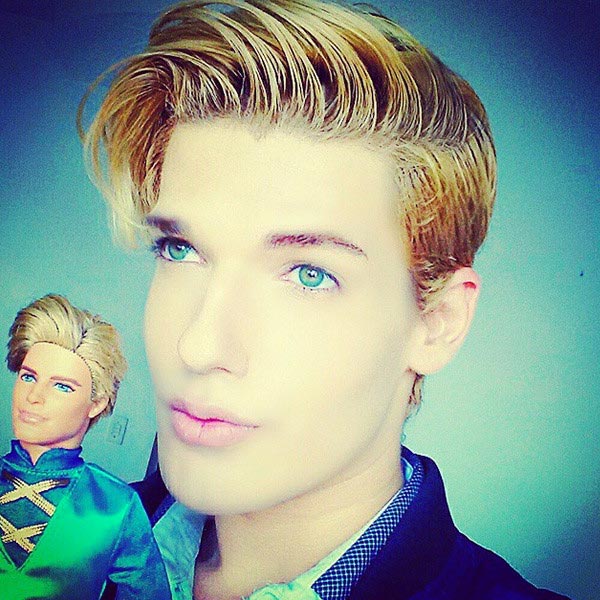 Celso Santebanes, a 20-year-old Brazilian model and aspiring matinee idol who branded himself as the human version of the Ken Doll died Thursday following a bout with cancer.

According to a report via the Latin Times the local heart throb contracted bacterial pneumonia as he was being treated with chemotherapy at the Federal University of Uberlândia Clinical Hospital in Minas Gerais, Brazil.

The model began entering beauty contests at the age of 15 and was told by many he resembled the plastic doll often seen paired with Barbie. Obsessed with looking as much like the doll as he could, the aspiring model spent tens of thousands of dollars on plastic surgery to alter his nose, lips, and other features.

His look became so famous he even released his own line of dolls that he modeled after himself to give Ken some competition. Nevertheless fate would intervene as the young man was diagnosed with blood cancer last December with the model’s health deteriorating quickly there after as he was then confined to a wheelchair.

The battle changed his outlook on life and what was important. He said he would not do any more plastic surgeries and focus on enjoying the simplicities of human life.

Offered Celso Santebanes in January: ‘Today I start a new cycle of my life,’

‘I am starting chemotherapy and I admit I’m a little concerned about some side effects, like hair loss, nausea, my body’s rejection (of chemotherapy), among other things. But I am no longer concerned with the issue of aesthetics. For me that doesn’t matter.

What matters is my health now, and I will fight for it.’ Reported Yahoo Brasil (google translated): The young man came to be in a coma and then recovered and in April , he left the hospital. After that, he said he wanted to write his biography and tell about the fans who won in recent years.But it ended up not resisting and died before also launching its own puppet based on himself and whose project was underway.

Offered the man in a sit down interview in May with Agora é Tarde: ‘Everyone who wants to be pretty, who wants to be perfect, to call attention to themselves, [it’s] to supplant this lack of… of love, perhaps,’ he said, adding that if he survived, he wouldn’t do any more surgeries.