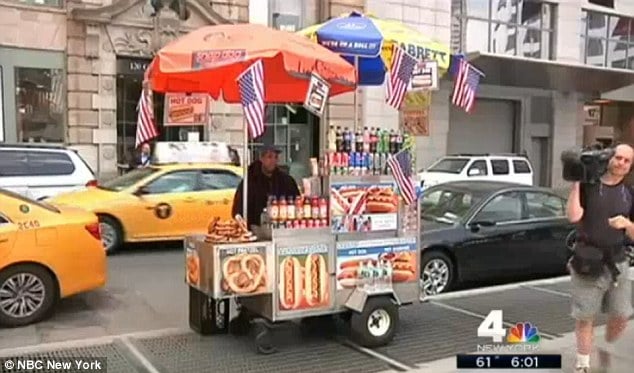 NYC street cart vendor, Ahmed Mohammed who went about charging unsuspecting tourists outside the world trade center memorial up to $30 for hot dogs has been sacked.

Told the man’s 22 year old employer, Abdelalim Abdelbaky whose father owns the food cart and vending license via the nypost: ‘I fired him over it yesterday after I watched the news,’

Abdelbaky said the scam vendor pocketed the extra money along with leaving his family with hundreds of dollars in fines to now pay off.

Things came to a head when the rogue vendor came to be slapped with three food-vending citations — after WNBC caught him on camera overcharging customers with accents.

Yes kids, it’s as easy as that- pick out the foreign accents and see what your crap charm and the delectable aroma of your steamy frank can get away with .

Ahmed Mohammed was ticketed for being too close to a crosswalk, having items outside of his cart along with failing to list prices — which is how he got away with the outrageously high prices in the first place.

In one case he tried to charge a New Yorker with a French accent $15 for a pretzel and a hot dog.

‘$9 for a can of coke? Yes but it comes with extra napkins and my promise that I will be thinking of you when I finally manage to go on to bigger and better things …’

Fines could now total up to $1,500 — a bill the owners of the cart must foot, Abdelbaky said.

The food-cart chief also has a beef with his ex-employee because he’s lost customers, he said.

‘Nobody would give him a job and he came to me. [But] I lost money — and I lost some customers,’ he said, adding he even let Mohammed stay rent-free at his home in Jersey City.

Reiterated the pissed off good friend in a time of need: ‘I lost money now, and I lost some customers, so I have a lot of losses.’

Since being busted Abdelbaky has now taken to posting the prices of some of the items on the cart (why wasn’t he doing it before?), including $2.50 for a hot dog and $3.99 for two hot dogs and a bottle of water.

Isn’t it time you tried to get one over your fellow mankind too…?