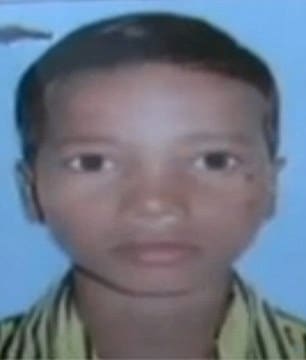 Lalit Verma an Indian school principal has beaten to death an eleven year old student after discovering that the pupil had stolen another student’s pencil and eraser.

The incident has since led to debate as to the excessive and heavy handed use of corporal punishment in the Indian school system.

According to the timesofindia the assault against the boy, Shiva Rawat came after the stolen items were discovered in the boy’s bag at Dwarika Prasad School in Railamau village.

At the time the student’s teacher called the school headmaster who became incensed and issued a vicious beating against the child.

So severe was the beating that the child complained of a severe stomach ache before vomiting blood upon arriving home.

An ambulance was called but by the time Shiva got to nearby Fatehpur Hospital his condition deteriorated and he was declared dead on arrival.

Since the beating the school principal has been charged with culpable homicide not amounting to murder.

Upon further questioning Lalit Verma admitted to ‘slapping‘ Shiva while questioning him about the stolen stationary.

The child’s body has now been taken for post-mortem to establish the cause of death, but police told reporters that it is likely he died of internal bleeding.

Police superintendent OP Singh said Shiva’s father, Chhavi Raj had filed a report with officers in Biddupur relating to the ‘unnatural’ death of his son.

Further legal action can only take place once an official verdict on the nature of Shiva’s death has been established and recorded.

According to First Post, the incident is not the first time the head teacher has been accused of using ‘extreme’ corporal punishment on his young students.

The headmaster allegedly beat up another student, Sudhir, son of Sajeevan, a few months ago.

In that incident the child’s father tried to take up the issue with the school authorities, but his complaint was brushed aside.

Told the father: ‘The principal is in a habit of beating up kids, sometimes with a stick, for even small mistakes.’

There are also numerous other reports of young Indian boys being beaten to death by teachers.

In the city of Burdwan, West Bengal, a nine-year-old complained of a stomach ache and died just hours after his private tutor reportedly beat him with a stick to failing to answer a question.

Elsewhere, in Bareilly, Uttar Pradesh, a young boy is said to have been beaten and thrown out of a window onto a busy road when his parents failed to pay school fees on time.

The child is understood to have died shortly afterwards. 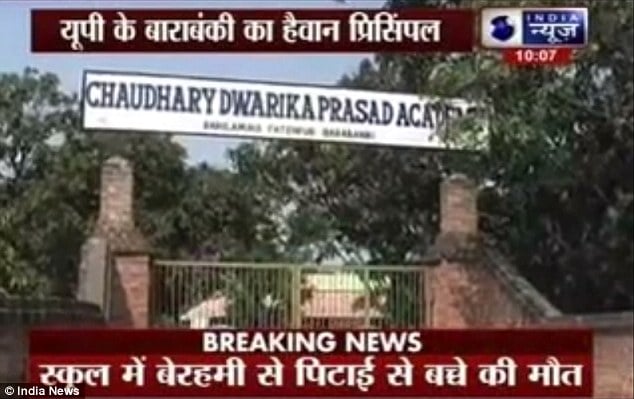