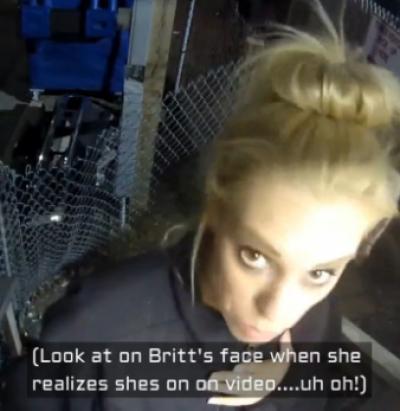 Espn reporter Britt McHenry has been suspended for one week by her employer after a video of their star presenter attacking a lowly parking attendant made the viral rounds.

Whilst it isn’t necessarily clear what inspired the dressing down ( presumably her automobile being towed away) that led to our collective prima donna dissing down on one female tow operator, it is clear that McHenry isn’t particularly happy and probably thinks she’s been taken advantage of or simply not afforded the proper respect her stature as a blond telegenic vixen on tv demands.

Looking directly into a security camera, Espn reporter Britt McHenry begins to lash into the unseen woman in front of her, unbeknownst to her in a few short days we too would also be witnessing her delicious rant which hints at the reporter’s attitude towards the world and those beneath her and forever destined to never match her pizzazz.

Explains our collective sunshine: “Yep, that’s all you care about, is just taking people’s money,”

“With no education, no skillset, just wanted to clarify that. … Do you feel good about your job?

The clerk declines to answer her. What is one suppose to say to a primadonna who is being forced to reckon with her mortality and the reality one is never too good to ever have their automobile towed away? Famous or not.

Whilst the clerk has probably heard this all before and for minimum wage isn’t going to even bother batting an eyelid, McHenry who seems to have missed a few logic screws continues to prod, now making her attack extra personal, just to show the lowly clerk how much better she really is.

Explains delicious milk cereal:  “I’m in the news sweetheart, I will fucking sue this place.”

“So I could be a college dropout and do the same thing?”

“I’m on television and you’re in a fuxking trailer, honey.”

Nasty things that one never expects their telegenic super hero to be spew at other less than privileged members of society who the reporter indiscriminately debased.

Aware that her stock price was heading south in a fast way, McHenry took to twitter this afternoon where she essentially asked us to put this inconvenient episode out of our memory box.

Lamented honey drops: In an intense and stressful moment, I allowed my emotions to get the best of me and said some insulting and regrettable things. As frustrated as I was, I should always choose to be respectful and take the high road. I am so sorry for my actions and will learn from this mistake.

What do you think, did Britt McHenry get the reality check she needed or should her employer never interfered in the way the ray of sunshine crudely conducts her personal affairs?

Or is this just a reminder that those of us in more high profile perches in life are expected to behave in more appropriate ways less we tarnish our sponsor’s/employer’s brand, not that wont stop you from regaling some lowly clerk next time your car gets pulled away too….