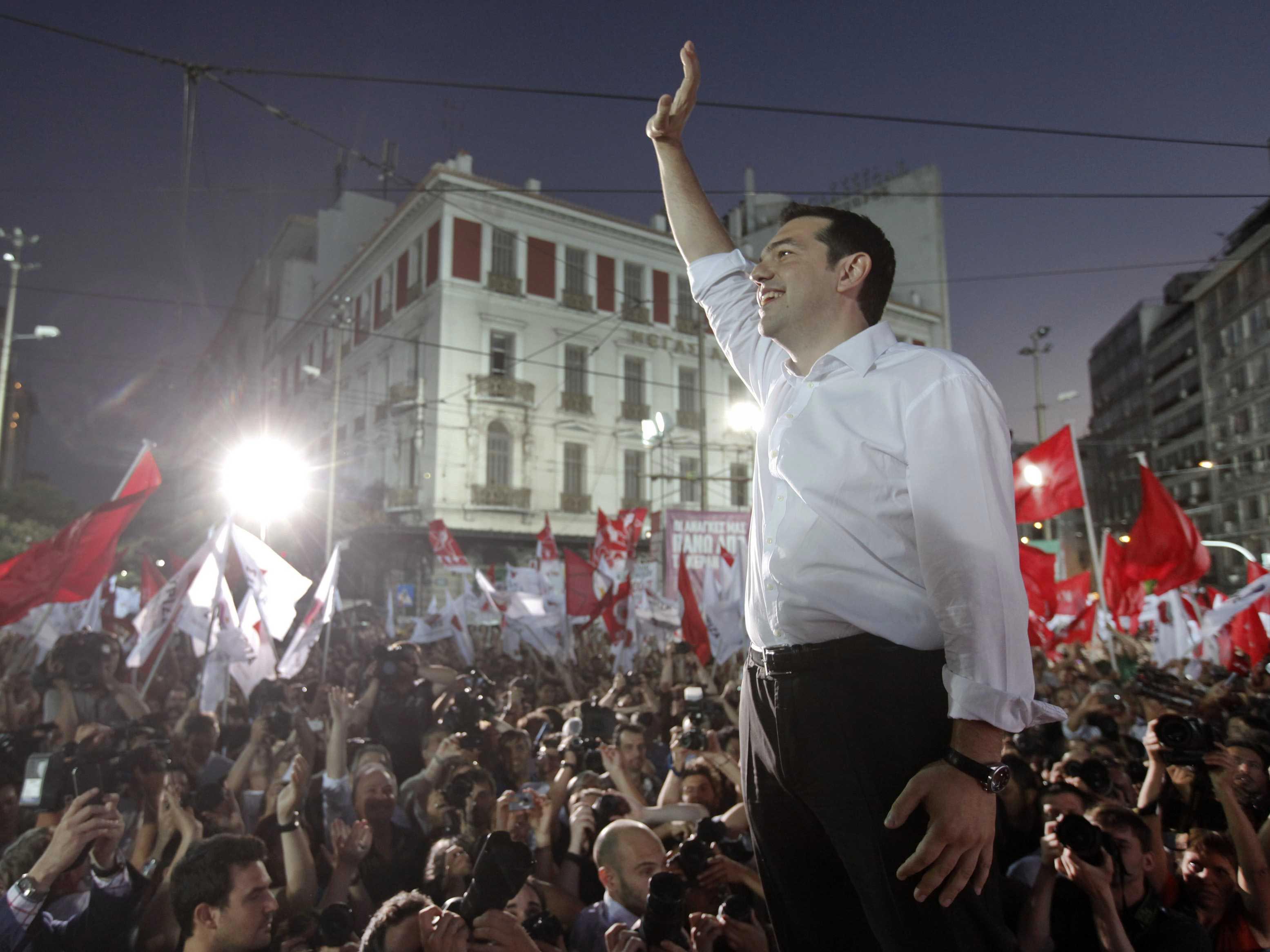 Greeks have sent Europe and the the financial markets a clear message today as exit polls show Alexis Tsipras Syriza party with a decisive win over its rivals and the conservative vanguard who had sought to keep the nation adhering to unfavorable austerity measures in the hopes of securing the financial market’s curry.

Forced to deal with disastrous austerity measures which has since seen a third of Greece’s wealth wiped out in the last 5 years, one in two young adults unemployed and a third of the nation living behind the poverty level, Greeks decided that they needed drastic change.

Enter 40 year old Alexis Tsipras, the leader of the left wing (described as radical by various factions of the corporate media club) who with just on 20% of the vote counted in exit polls has taking 36.5% of the national vote with the incumbent conservative government of Prime Minister Antonis Samaras’s New Democracy party taking 27.7%.

The far-right Golden Dawn placed third with 6.3 percent followed by To Potami, a potential Syriza coalition partner, with 5.9 percent.

While the projected victory is coming in at a wider margin than polls predicted, it remains unclear whether Syriza will be able to govern alone.

Even with a razor-thin majority or in a fragile coalition, the result still hands Tsipras, 40, a clear mandate to confront Greece’s program of austerity imposed in return for pledges of 240 billion euros ($269 billion) in aid since May 2010.

Notes bloomberg:  The challenge for him now is to strike a balance between keeping his election pledges including a write down of Greek debt and avoiding what Samaras repeatedly warned was the risk of an accidental exit from the euro.

Offered Aristides Hatzis, an associate professor of law and economics at the University of Athens: ‘Most Greeks voting Syriza don’t expect a spectacular change but a marginal one. A marginal one would be significant for them.’

At the crux of the matter is how the Greek government was set to make good on speculative loans made to Greek businesses which then led to political pressure to force the Greek reserve bank to accept losses on speculative bets and by proxy to pass the buck onto the Greek population who were by defacto now being asked to supplement ill advised bets of bankers, the IMF and hedge funds.

In turn the incumbent party of Antonis Samaras’s New Democracy was forced to adhere to dogma policies at the behest of the EU, IMF and bankers in Germany, for fear of having previously negotiated loans cast aside if the Greek government failed to deliver to on its previous pledge to make good on the fowl loans.

That though would be Samaras’ undoing as he initiated unprecedented austerity policies at the behest of the financial market and the economic elite who were looking to recoup on speculative bets and then some on new loan packages which would see the value of their debt instruments rise over time.

That said what remains to be seen is how Alexis Tsipras Syriza party will be able to negotiate the financial hegemony and calls for fiscal restraint at a time where investment back into the community is the more palpable and desperate option of a population which has since been brought to its knees and follow the will of the financial hegemony.

Wrote Tsipras earlier this week in a piece published in the Financial Times: ‘We demand repayment terms that do not cause recession and do not push the people to more despair and poverty,’

Not only will Tsipras have to contend with whether he will command an outright majority or be forced to make back door deals with other political parties is the question of what deals can he make with the IMF and the European Central Bank as fears have begun to percolate that Tsipras will simply choose to walk away from all outstanding debts all together along with exiting the Euro and the wild card of going back to the drachma.

A course of action that would unleash systematic revolt amongst other European nations, including the far larger economies of Italy, Spain, Portugal and Ireland all staggering under the weight of austerity and outstanding loans and keenly paying attention to developments in Greece. A domino effect that the financial hegemony with much at stake cautious to bring to the fold…

Which is to say a brewing game of political chess has just been unleashed and for the first time in many years the financial markets, the hegemony and oligarchy has been put on the backfoot as it carefully assesses the new will of a population and that of greater Europe to bring economic liberty back to the common man who until now has been made to bear the consequences and brunt of bankers and speculators machinations and bets gone wrong.

Contemplated noted Greek actress, Anna Rezan Kritselis who with her fellow Greek youth voted for the new government in Athens:

‘Greece gave a chance to a miracle and the miracle just happened!It is the first time I feel proud to be a Greek in years, as this victory is not the honor of a couple of people, an athlete or an artist, it is the Greek people that prove, that “we are the world”,”we are the ones,who make a brighter day”, when we change, we can change everything!

After the end of the dictatorship era in 1974, it is the first time that “New Democracy” or “Pasok” is not in charge of the country!

It was not sane that those clowns lasted for so long, but its always early to become what you should have been. So,now, in 2015 I feel that the Greeks tonight gave the signal to the people around the world, that people do have the power, and we are the change we wanna see around us.’

What remains though is how new developments will be absorbed by the oligarchy and financial markets, what conciliatory gestures Alexis Tsipras may offer and now that he has the will of the population behind him whether one politician can master the political manouevering that is set to come before him as financial heads in Franfurt and by extension, London and NYC begin to wonder how they might want to counter a possible new insurgency of individuals taking back their own economic liberty…

And then there were these thoughts on the web that caught my eye as well. See what you think?

Living on borrowed wealth never works in the long run. But hey, it’s their country and let them vote for more failure.

Too late, nobody has profited more from the EU than Germany. She was rebuilt after WWII and the world helped Germany with unification. Nobody has been more responsible for death and destruction in the history of the world than Germany and all has been forgiven. Even today, Germany is protected by the US and does not need to spend on large standing armies. If Germany wants to dominate Europe, she needs to stand up when times get tough. Her people are hard working, industrious and well educated. She cannot take the ball and go home when the going gets tough.

The Greeks have no intention of leaving the EU. There merely want to stop the slide into poverty. The status quo and leaving the EU assure more poverty and hardship. Staying and rewriting the deals can ease the suffering. This where leads for Greece.

The EU has a problem with Greece. As a practical matter, a Greek exit has little impact on the EU and its economies. Greece is too small. The problems are Spain and Italy. If Greece gets a deal they will want one. An exit by Spain or Italy is unthinkable.

This has dragged on for too long.

Multiple economic analyses have shown that the structural differences between Germany and Greece make Greece’s presence in the Eurozone untenable right now.

Greece needs massive quantitative easing and inflation which can’t be produced as long as the country is a part of a Central Banking system dominated by a country that does not need significant monetary stimulus.

Obviously exiting the Eurozone would be hugely painful in the short term (capital flight, inevitable spike in interest rates, etc.) but an exit combined with a partial or complete default could, on balance, end up being less painful than struggling through another 5 years in the straightjacket of the Eurozone.