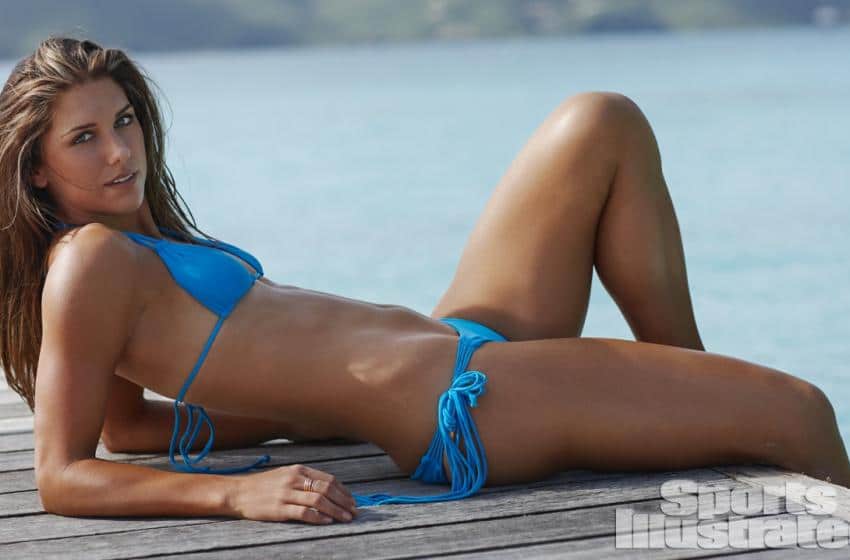 It might be time for a new US women Soccer star pin up girl since former it girl Hope Solo has found herself in increasing public relations faux pas in recent times. Welcome then Alex Morgan, key striker for the US women’s soccer team who has managed to net 49 goals in 77 appearances for her home NJ team as she shines in the upcoming Sports Illustrated Swimsuit edition.

Reports fansided: Swimsuit aside, Morgan is back on the pitch after recovering from an ankle surgery in October. She’s back at 100 percent and will participate in the National Team’s training matches against England and France next month as they prepare for this summer Women’s World Cup.

The sneak peak of the upcoming Sports Illustrated Swimwear edition comes just as Alex Morgan confirmed this week to be joining the US team after virtually recovering from an autumn ankle injury, where she is expected to play at forward in World Cup tuneups next month against France and England.

‘She worked very hard on her fitness when she wasn’t able to maximize time on the field.’

Ellis would go on to say, Alex Morgan is considered a key component of the team’s bid to recapture the World Cup after losing to Japan in the 2011 Finals.

And then there’s the below video yummy sampler of Morgan for readers to consider especially since she will be a key component of the team’s bid to recapture the World Cup after losing to Japan in the 2011 Finals. And if you’re thirsting for more of Alex, there’s her 2012 Sports Illustrated swimsuit appearance to as well as her 2014 appearance to contend with too…