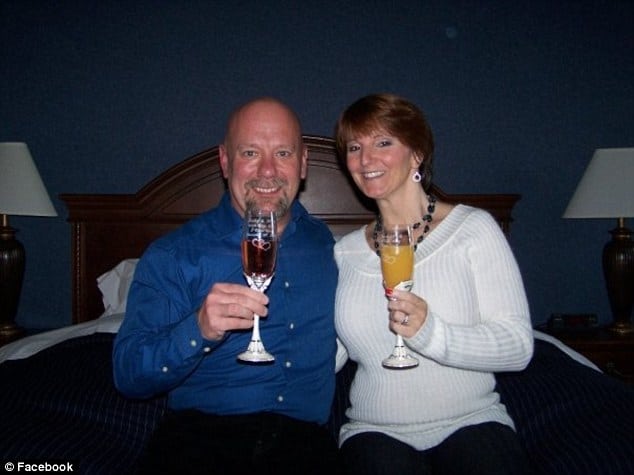 In an bid to rid his wife of the suffering on remaining on life support, Mark A. Lavoie, Tuesday morning shot his wife, Katherine dead at New Hampshire’s Wentworth-Douglas hospital before then turning the gun on himself.

The shooting would come minutes after Lavoie had posted of his resolve on Facebook that he was trying to help his sick spouse ‘escape’ from life on respirator, even if that meant taking his own life too.

Wrote the 50 year old of the impending double suicide plot:

‘I am more than happy to sacrifice my life to fix my doing and join her spirit in a happier place,

‘I just wanted (to) let people know my thoughts as to why I am doing this, weather (sic) you can understand it or not.’

What remains unclear is how ‘Kathy’ came to be on life support, but Lavoie said in his social media post that Kathy had battled ‘bi-polar demons that have been swirling around her brain since childhood’.

Lavoie would write it was his fault that his spouse was on a respirator because he called 911, but did not elaborate. 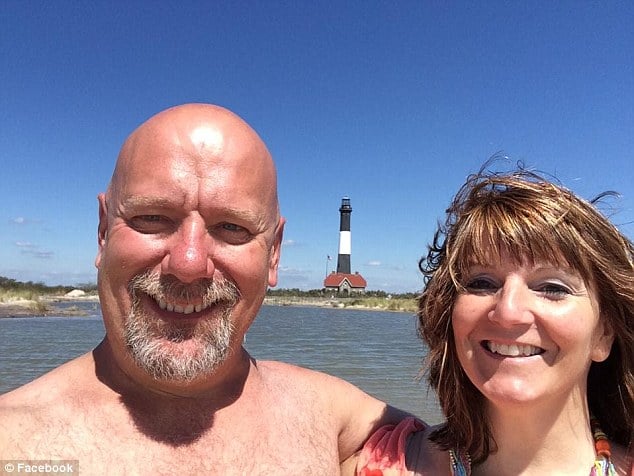 ‘Though a difficult subject I hope my family whom I love dearly can make some sense of what I’m doing though unless you have dealt directly with mental illness (it) will be difficult,’

‘Please don’t mourn for me, my spirit will be in a much better place with my soul mate; you may even catch a glimpse of us from time to time.’

As the status went up, worried friends begged Lavoie: ‘Mark, please don’t do this!’

However it seems it was already too late, with the post going up moments before walked into the hospital.

As the day went on other friends posted commiserations.

One close friend, Charlene Wood, wrote to Facebook: ‘I think Mark’s choice was to not remain here without Kathy and face what would be criminal charges and he made sure he honored her wishes which was to not be in a vegetative state!!! Until our country can honor right to die laws, people will have to make very difficult choices to end their pain and suffering!!! He had such courage to carry out her wishes and put her life before his own….such honor and respect for his wife!!!!!!!

Another friend, Kelly Lee Judson-Bacon, wrote: ‘Mark- I have never understood suicide but I truly believe you are a courageous and honorable man. Kathy was such a sweet, charming woman. I hope you are both together and at peace. My thoughts and heart go out to your families. I will cherish the memories we had during our school years, the class reunions, etc. RIP, my friends.’

Wentworth-Douglass Hospital, which has 178 beds, remained open following the shooting.

The intake and treatment of patients was not interrupted by the incident, officials said.

The Office of the Chief Medical Examiner will be conducting autopsies.

And then there was these comment on the web that caught my eye:

The real tragedy is doctors not respecting a patient’s wishes and keeping them alive in a state they do not want to live in. Of course, that’s more business for them.

Tragically, it sounds as though the husband had some mental issues of his own.

Bi-polar. Repirator? She was trying to commit suicide, and he intervened by calling 9-1-1 and then thought differently and then shot her? It is tragic, but something is not adding up and/or it could be he has his own demons.

This is an absolute tragedy. However, suicide is never the answer. This man did the right thing by calling 911, and the wrong thing by killing his wife and then himself. While I understand that people get to a point that they think there is no answer, you have to think not only about yourself but what taking your own life will do to others.

And the posting on Mark A. Lavoie’s facebook wall as it appeared in full:

I want to start off by saying this is going to be officially ruled a murder/suicide when in all actuality it is a double suicide. My baby was trying to escape the bi-polar demons that have been swirling around in her brain since childhood and now because of my selfishness in dialing 911 she is experiencing the only thing she feared more than her illness…life support on a respirator.(Even though I brought her living will, the doc said her wishes didn’t apply because depression isn’t a non-reversible state. I however did not see that stipulation.) I am more than happy to sacrifice my life to fix my doing and join her spirit in a happier place. I just wanted let people know my thoughts as to why I am doing this, weather you can understand it or not.

I never did end up getting a will, living or otherwise so I would like to make a couple points clear and hopefully posting this on here will be enough to get my wishes honored. If FB deletes it I have a copy saved on my laptop. Everything I own including the house and anything else Kathy left to me in her will is to be split evenly between Kori Ricker and Tara Ricker-Maus. I also have a 401 at Portsmouth Ford and Berlin City Ford, the paperwork should be in the filing cabinet in my bedroom) You will need to figure out how to split the house, co-ownership, one buying the other out or sell it and split the profit. Also please assure the pets are cared for.

I would like someone to volunteer to get this next issue resolved, if nobody does could you please take care of this Jan and Dan Roberge and spare the kids? There should be plenty in the checking and savings accounts to take care of it. Go to any funeral parlor they should be able to take care of the whole thing. We are both donors so have them send our bodies to a tissue processing facility (not sure what they are called) then they will send us to a crematorium. I don’t care what is done with the ashes but I know Kathy loves Damariscotta Lake. Though a difficult subject I hope my family whom I love dearly can make some sense of what I’m doing though unless you have dealt directly with mental illness if will be difficult.

In case FB deletes this for whatever reason I saved a copy to my laptop and hopefully it will be enough to get my wishes followed.

Please don’t mourn for me, my spirit will be in a much better place with my soul mate; you may even catch a glimpse of us from time to time.

Well in all the years I’ve been on FB I never was one for posting any drama…..I was due one

Love you all, peace out!