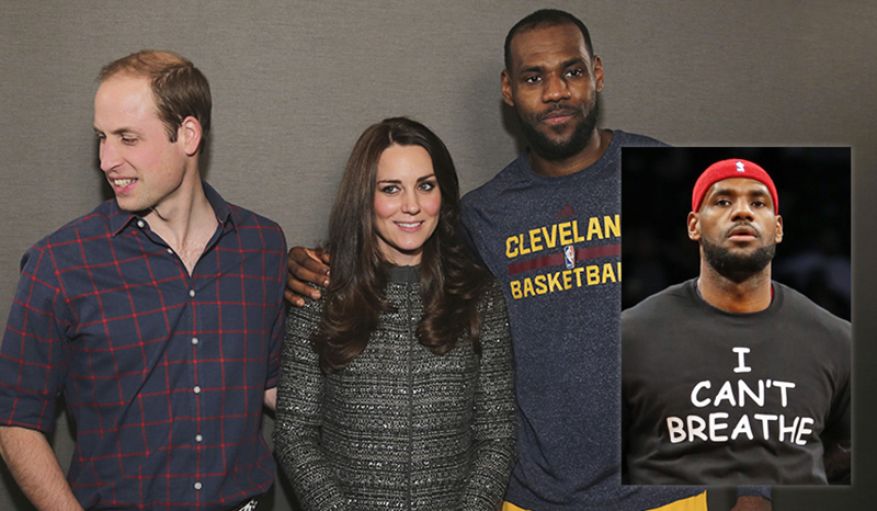 It seems a flutter of disquiet has been created with the release of images showing a somewhat chastised and unnerved Kate Middleton (or is that just the tabloids reaching?) being touched by basketball great, LeBron James.

While for us mere mortals such gestures are openly received without a second thought, Kate Middleton and Prince William are not mere mortals but royalty in fact with their very own special rules. Rules which demand civility and etiquette and the knowledge that one should never ever touch them unless they initiate it (one does note Wills looking the other way out of politeness…) So what now?

Curious to get a pulse of the apparent faux pas, I decided to see what other journals thought of the apparent indiscretion or what has since been deemed breach of Royal etiquette. Blah!

Opined the UK’s Telegraph: The breach of protocol echoed the time when Michelle Obama caused a stir by putting her arm around the Queen in 2009.

The royals are on their first official trip to the US since 2011.

But wishing to get a more direct response from the horse itself, I went to the official website of the British Monarchy which advised as follows:

‘There are no obligatory codes of behavior when meeting The Queen or a member of the Royal Family, but many people wish to observe the traditional forms,’

‘For men this is a neck bow (from the head only) whilst women do a small curtsy. Other people prefer simply to shake hands in the usual way.’

But no explicit mention if one should ever touch a royal which Kate Middleton would like to remind you that she is these days.

The UK’s Independent would take the view that ‘protocol ‘prohibits anyone from touching or kissing members of the royal family.’

Whilst Dianne Marsch, the director of the New York Etiquette School of Manhattan via the nydailynews advised as follows: ‘We acknowledge the contribution LeBron James has made to sports, however, he is expected to educate himself according to protocol,’

‘I had mentioned that the body language of the Duke and Duchess of Cambridge would clearly show what is acceptable behavior and no one has the right to trespass into their space.’

Added etiquette expert William Hanson via the UK’s dailymail:  ‘Americans are much more tactile than we Brits and this is another example of an American being too touchy feely with British royalty. You’d have think they’d have learned by now.’

Whilst a majority of journals may have kept a stiff reserve as to the merits of acceptable behavior (even for a sporting great), commentators on the web had a mixed bag to offer, some of which left an indelible smile on this author’s face. See what you think:

Our ancestors died fighting a war so we wouldn’t have to bow down to the unnecessarily finicky and proper British royalty.

This isn’t England anymore, and they aren’t royalty here. While they do have diplomatic immunity, they are still foreigners and their traditions are not upheld here, as we have our own culture and our own rules which they know full well about before coming here by choice to meet our people.

The day you expect 320,000,000 people to learn the ways of a few foreigners is the day we stop saying ‘MERICA.

They are not “royalty,” in this country.

You dont have to sugar coat it..I know they been watchn the news..point blank period she was just scared that a black man was touching her.

He should’ve patted her on the bum.

Wonder how Beyonce liked not being the center of attention?