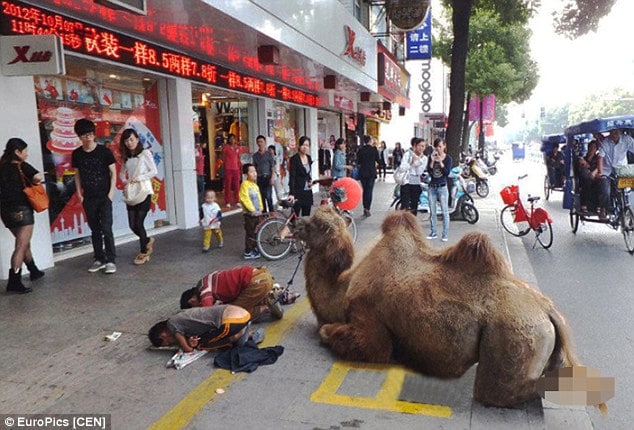 Pictures circulating showing Chinese beggars who had chopped off camel’s hooves in order to earn public sympathy and presumably hand outs towards its keep has caused outrage.

The camel and the two beggars reports the UK’s dailymail were photographed in the city of Fuzhou, Fujian province, south-east China, where police confirmed mutilating animals has become the new trend.

Ironically mutilating people (the old trend), they said, no longer seemed to gather as many generous donations, with people more often making a wide berth around limbless beggars.

Despite gangs having amputated camel’s hooves, local police told that no legal provision existed where they could take action.

According to the shangaiist the action of chopping off the camel’s hooves which was first noted in this particular instance in the month of April has since wrought gang organizers an abundance of cash.

In their defense the beggars assert that the camel was a wild camel that they had rescued after being run over by a train and that they had taken it upon themselves to care for it whilst ‘being forced’ to beg in order to acquire the means for its upkeep.

A story that local cops attest to be an outright sham. 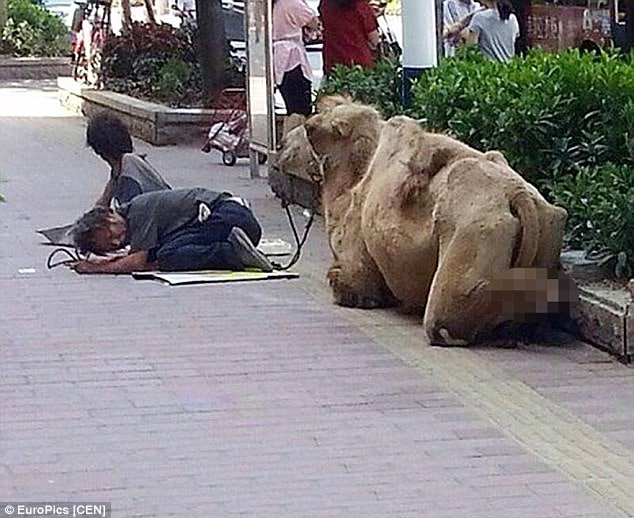 With just 600 wild camels left in north-west China’s Gobi desert, and 800 in the deserts of Mongolia, their survival in the world is seriously at risk and they are supposedly strictly protected.

That said in practice little action is generally enforced against individuals who have increasingly taken up the practice of mutilating animals because of the difficulty in proving they are not domestic animals. This in turn has now led to animal rights activists demanding a change in the law on the torture of animals, in a nation where cruelty to animals is not illegal.

Told Animal rights campaigner Xiong Kung: ‘You can see that the animal was obviously mutilated some time ago because the wounds are now healed.

‘My information is that they get a large amount of money every day from people shocked by what they see and in effect they are rewarding these criminals for torturing the animal in the first place.

‘But when police turn up all they can do is maybe move them on or fine them for begging, but nothing else. And that will remain the case until we get laws protecting animal rights.’

It is not at present understood how likely any changes in the law are likely to come in a nation which harbors an ambivalent attitude towards the rights of animals. 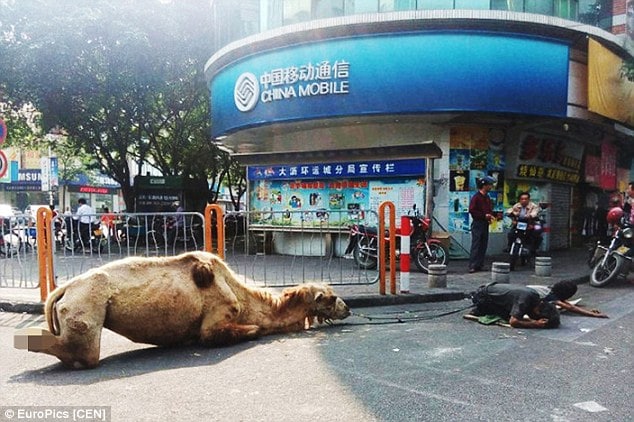