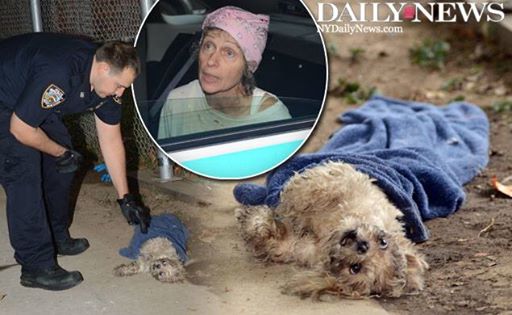 A Brooklyn dog has died after being tossed down a trash chute by its owner, an elderly woman who would claim that the dog was making her ‘miserable.’

The dog would be found still alive after a resident heard the sounds of the dog crying after it had been tossed down a chute into a trash compactor in the the housing projects off Sheepshead/Nostrand, Brooklyn.

NY Fashionista arrested after starving and battering puppy. Thrown away in plastic bag

Despite being pulled out by cops, the nydailynews reports the dog had to be put down as a result of its heinous injuries.

Told the dog’s owner, an elderly woman who would initially be cuffed by cops before later being released: ‘He made me miserable, I have pain.’

Neighbors had seen the dog waiting in front of the owner’s fourth-floor apartment door earlier in the day told a resident of the building.

Soon after, a resident throwing trash into the compactor heard the dog told the neighbor.

Adding: ‘She went to throw out the garbage and she heard the dog crying,’

‘I ran to housing and got (them) to open up where the (compactors) are because the door was locked.’

The neighbor would tell the dog was found bleeding in the bottom of the trash compactor.

‘It was bleeding. It was still crying,‘ reiterated the resident.

Despite being transferred into the care of the ASPCA the dog would later have to be euthanized, police would later tell.

Pix11 reports neighbors of the woman describe her as having ‘erratic behavior.’

The outlet would also tell that two cats were removed from the woman’s apartment, and a padlock has been placed on her door.

Commentators on animal rights ‘Voice 4 Pitbulls & All Animals’ facebook page have since expressed their disgust at the woman’s actions and said they hope that things will start to change.

‘So many animal cruelty cases, it’s getting worse and the legal system needs to take note and start handing out proper sentences,’ said one Facebook user.

Offered another: ‘Shove her sorry arse down the trash chute, sadistic piece of shit !!! R.I.P Little One !!!!’

Police have told they are continuing to investigate the incident.