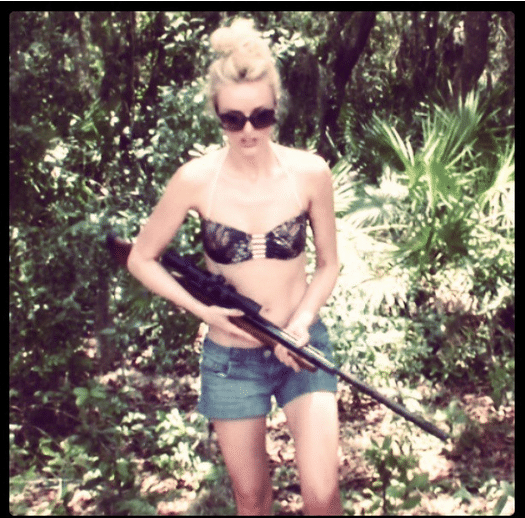 Making her way into the annals of popular culture is me too Bunny Hunter, real name Michelle Rovinsky known for her real life like Barbie Doll predispositions and the star of a new bTV segment which seeks to teach women to fear god and how to carry a loaded weapon.

The 32-year-old Tampa, Florida, native, who boasts a substantial weapons collection and has a fondness for hunting, skinning and gutting her game, tells the UK’s dailymail wishes to be a better role model for women , something which she will be putting to the test her new bTV segment.

Tells the 100 pound petite doll like Bunny Hunter: ‘Celebrities like Kim Kardashian and Miley Cyrus have no morals, they are terrible role models for young women,’

‘I want to show women that you don’t have to act like a slut to get ahead.’

Kids, let me pause for a second whilst I reach for my gentle afternoon cup of chamomile cup of tea.

‘Someone looks at me and they think, “what a cute little Barbie,”‘ Bunny clucks, in a clip for her bTV appearance. ‘Little do they know, they’ve got something coming their way if they try and mess with me.’

‘I see my make-up and clothes as kind of like camouflage,’

‘People let their guard down and I let them think I’m stupid if I want.’ 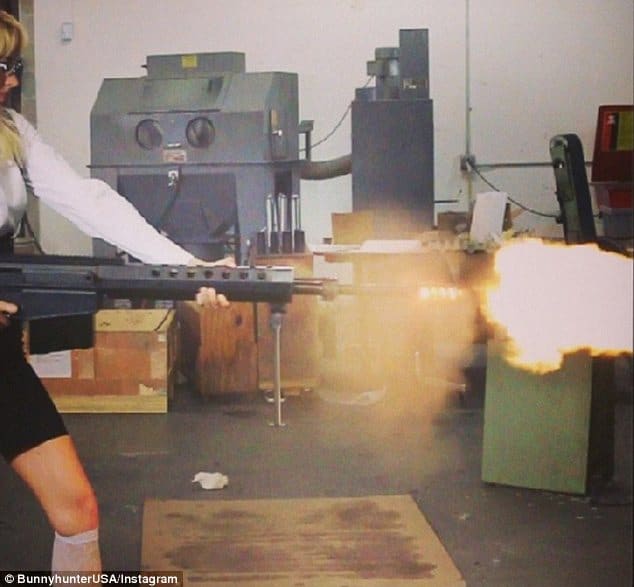 Bunny unabashedly tells how she grew up in what she refers to  as ‘the gunshine state,’ as part of a military family with four brothers. Most of friends are military too, she says; which helps keep Bunny sharp with ‘up-to-date tactics.’

So how does Bunny Hunter feel about guns you wonder? Glad you asked…

‘The right to bear arms – it says right there in the constitution that it’s in case of a political uprise from the government,’ she tells bTV earnestly. ‘I feel that a lot of the laws that have been passed or are trying to be passed have to do with that. The government is trying to strip us of our arms.’

Tells Bunny Hunter on her website: ‘I may look like a Barbie doll, but that’s just ONE of the weapons in my arsenal!’

‘This God-fearing, patriotic country girl is striving to help restore this once proud land back to that which was originally envisioned by our Founding Fathers.’

Bunny then tells how she came to shoot her first gun when she eight years old, where naturally it was love at first bang. ‘I was just elated,’ she recalls. ‘I couldn’t have been happier.’

Adds Bunny Hunter via the U.K.’s Sun: ‘A lot of women are afraid of guns because they don’t know anything about them,’

‘So for them to see another girl who’s efficient with firearms, who’s teaching them how to use them, I think that that helps a lot.’

Thankfully for Bunny, she’s very well stocked up on guns, including an AK-47, a semi-automatic AR15, a Glock handgun and 357 revolver—something that ought to keep the trigger happy amongst us in good spirits.

And what of Bunny Hunter’s love life? Surely there must be an equally willing gun enthusiast amongst you that would revel over the chance of getting into Bunny’s good graces:

‘These days men don’t act like men,’ laments our Bunny who has been going close to 6 years being single.

Reiterating: ‘I want a man who is able to fix things with his hands and isn’t afraid to get dirty. Metrosexuals do nothing for me – I want a man who can handle a firearm.’

Bunny Hunter can be also be found on Instagram and on her YouTube channel where you will surely come to fall deeply in love with her….