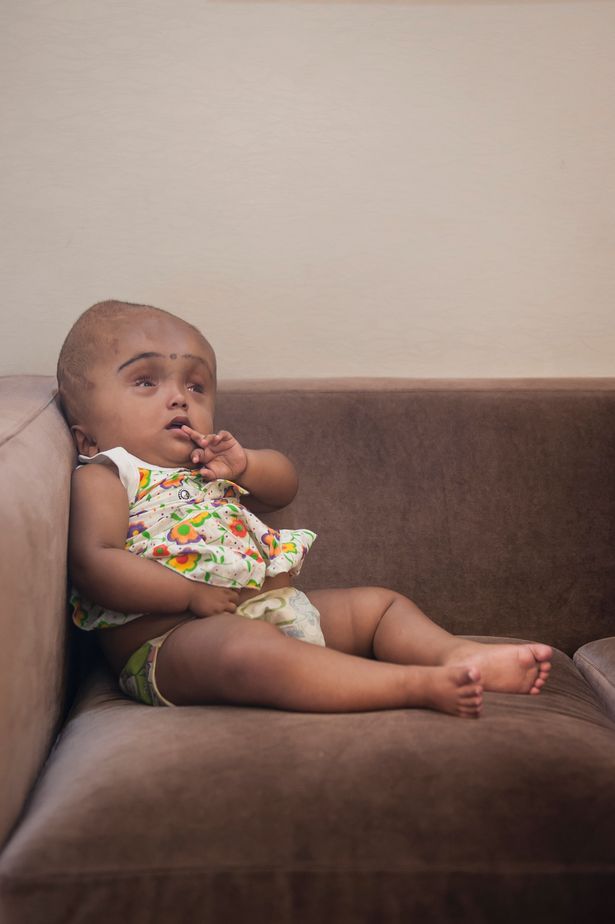 Roona Begum the Indian baby with a swollen head has defied doctors expectations as she has come to triumph after a recent spate of operations.

Three-year-old Roona Begum hit headlines last year when she was rushed to hospital suffering from an extreme form of hydrocephalus – also known as ‘water on the brain’.

Although surgeons were able to reduce the size of her huge head, the child was later discharged with little chance of survival.

But this week the same medics were amazed to find that not only is Roona alive, she is is even starting to laugh and smile.

‘The doctors said she would not live – but she has survived,’ told Roona Begum’s mother Fatima Khatun, 23.

‘She is much better now. She can hold her head straight and she can move her head from side to side on her own. She responds to other kids and she will smile if other kids call out her name.’

Adding: ‘I would be very happy if she could stand and talk and be like a normal child. We hope she will one day go to school.’

Begun who came to have her head circumference reduced from 37in to 23in through surgery last year, cannot yet walk because of the weight of her head.

But she is able to crawl, eat, sleep and interact with her parents with much more comfort at their home.

The family’s new hope comes more than a year after Roona was admitted to the Fortis Memorial Research Institute and Hospital in Gurgaon, on the outskirts of New Delhi, in April 2013.

Facing with huge medical bill the couple had little chance of meeting, they came to find themselves in pleasant disbelief after world sympathy prompted Fortis to tend to her rare condition for free.

Undergoing several rounds of surgery in May and June last year, doctors took to draining excess fluid from her head dramatically reducing the size of Roona’s skull. Spending 105 days at hospital before being discharged in August and then returned in December for further reconstruction on her deformed skull.

Neurosurgeon Dr Sandeep Vaishya who assessed Roona again this week has been surprised by the extent of her recovery – but says there is still has a long road ahead.

He said: “I see a lot of improvement, which I didn’t expect. She has started laughing, she makes a lot of sounds and she occasionally speaks a few words.

‘She has gained a lot of weight and her activities have improved a lot. But whether she will be able to live a normal life, nobody can say.

‘But most likely I don’t think she will be absolutely normal because with such a severe case of hydrocephalus there has to be some damage to the brain.

‘But with the improvement she has shown we are hopeful she will be able to do some things.’

Roona’s progress has been so good that Dr Vaishya now wants to proceed with yet another operation to further reduce the size of her head.

But her concerned father Abdul Rahman, 21, who has seen her brought back from the brink several times, is worried about the risks.

‘My wife has been through a lot with Roona’s condition and in the past people have suggested we give her away to an orphanage or an ashram [a type of spiritual monastery],‘ told the illiterate bricklayer, who earns just $3.50 a day.

‘So if the doctors can guarantee the surgery will definitely make her better and make her able to sit up, talk and be like a normal kid, then we would want it.

‘But if they cannot give us that assurance, then we don’t need it. We would much rather let her be as she is.’