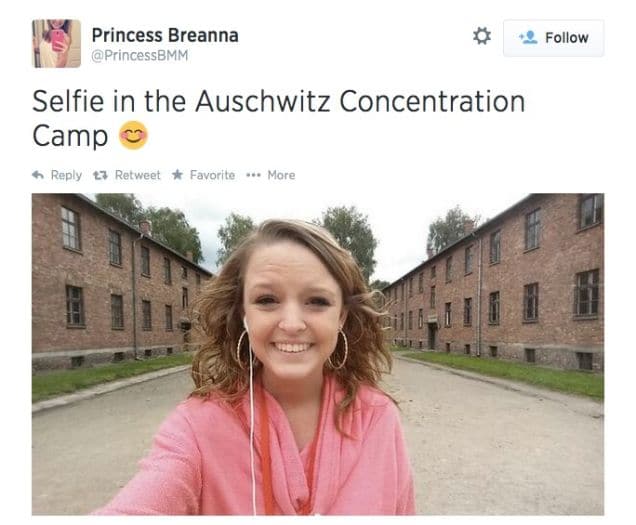 Breanna Mitchell who goes by the twitter handle @PrincessBMM (aka Princess Breanna) has come to find herself widely regaled after posting a happy go lucky selfie at Auschwitz concentration camp that at the time the teen proudly took to showing off. Until it was later brought to her attention the site of her illustrious selfie happened to be where one million Jews came to be experimented on and executed. But at least for one moment it felt like a very happy moment.

Nevertbeless happiness quickly faded to ‘Did I really really fuck up?’ after social media took a good long look at Breanna Mitchell’s yummy smile and begged to have her head.

“@PrincessBMM How can you be happy and smile in this pic? Do you not understand the horrors and murders that happened here? I’d be crying,” one Twitter user said in response to the selfie.

“The Auschwitz Concentration Camp Selfie. A new low in vanity,” another tweeted.

“@PrincessBMM @ianbhough Did you manage to take any of you laughing inside a gas chamber or maybe one with your head stuck in a cremator?” one user added.

Keen not to be misunderstood, the teen insisted those attacking her had it all wrong. She wasn’t ignorant of the history of Auschwitz. In fact, she said she had studied it with her father, who has since died, and they had hoped to go there together. She says she was smiling because she finally made that trip and the image and yummy emotions were taken out of context when it went viral.

Which is to suggest most people don’t associate happy yummy emotions when it comes to death camps.

But in Breanna’s defense, this wasn’t about death, this wasn’t her in 1944 or was this her attempting to disrespect the memory of those who suffered. It was perhaps simply a teen’s overzealous regard for history and the fact that she had finally made it to a historic venue and there she was with her very yummy happy go lucky eerie smile remembering and sharing that for posterity.

Strangely Breanna Mitchell would choose to retweet those who supported her, despite the questionable content of those tweets.

And although our collective hero asked people to stop sharing and commenting on her initial tweet, Breanna Mitchell hasn’t taken her down her initial tweet(just a suggestion Brea…). Instead, she’s shifted to tweeting about how hugely viral her hugely virulent photo has become.

Isn’t it time you used the death of millions of people to publicize your right to be an internet meme? 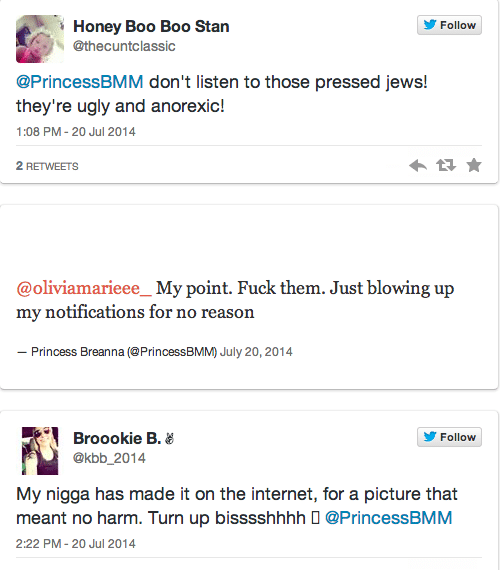